FAMILY TOGETHERNESS » PARENTING ADVICE » How to Get Your Child to Stop Sucking Their Fingers in Only 2 Weeks!

When your children are babies, finger sucking is adorable, and great for helping them self-soothe and sleep through the night. At five though, sucking fingers, isn’t as precious, as you start to worry about orthodontia. We recently discovered a great way how to stop finger sucking in our five year old daughter, that was both cheap and extremely easy. I hope it may help you get your child to stop sucking their fingers. 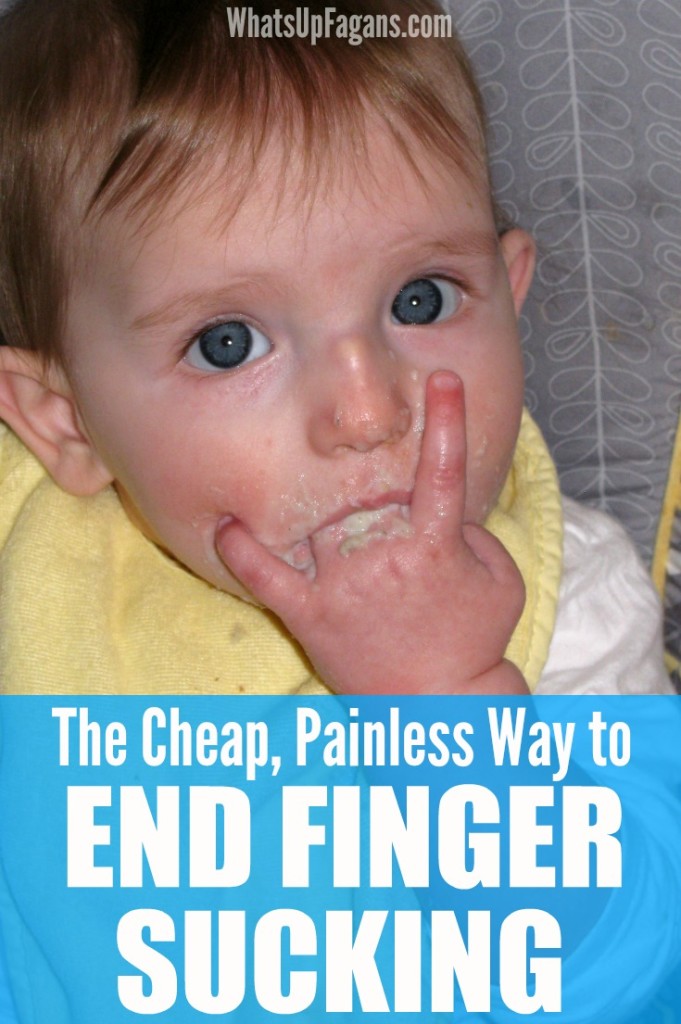 My oldest daughter began sucking on fingers at a few months old. I always knew the day would come when she’d have to quit this habit.  When she lost her first tooth on Thanksgiving a few months ago, we knew that it was time to help her stop finger sucking.

Finger sucking can mess with your child’s teeth, but it can also damage a child’s fingernails, making them soft and weak. Callouses also appear on their fingers.

I never sucked my fingers or thumb as a child, but my husband did and for years. He was 10 (or older?) I believe when he finally stopped sucking his thumb.

Do you know how he finally kicked the habit? By breaking his thumb.

At the very first practice of baseball season one year, he was wearing a brand new, unbroken in, baseball glove when he caught a ball. The new mitt broke his thumb.

Obviously, we couldn’t break our child’s fingers in order to get her to stop sucking on them! I always told my husband he would have to deal with breaking the finger sucking habit because I was clueless.

How to stop finger sucking

For several months we discussed various reasons why she should stop sucking her fingers, and relatively soon. We told her she’s getting older and losing teeth, and we want to make sure her permanent adult teeth come in just right. She seemed hesitant, but on board with the idea that she needed to stop sucking her fingers. We didn’t shame her about it, but just explained that it needed to stop eventually.

Earlier in the year, at her dental visit, the dentist suggested working with her on not sucking on fingers during the day, so we occasionally pulled her fingers out of her mouth, and reminded her not to do it.

At the start of 2016, everyone in the family created goals for the year (yes, even the baby got some goals added in). We talked with our twin five year olds about what goals were, and gave some suggestions on what some good goals would be, as well as shared what some of our goals are for the year. We challenged Alison to make the goal to stop sucking her fingers. She accepted.

How to get your child to stop sucking fingers

A few weeks after the new year, while shopping at the store, my husband grabbed a pair of cheap basic knit gloves and told Alison she was gonna do it: she was going to stop finger sucking.

He explained to her that she would wear the gloves to bed, where she most commonly sucked her fingers. She was nervous, but excited too. 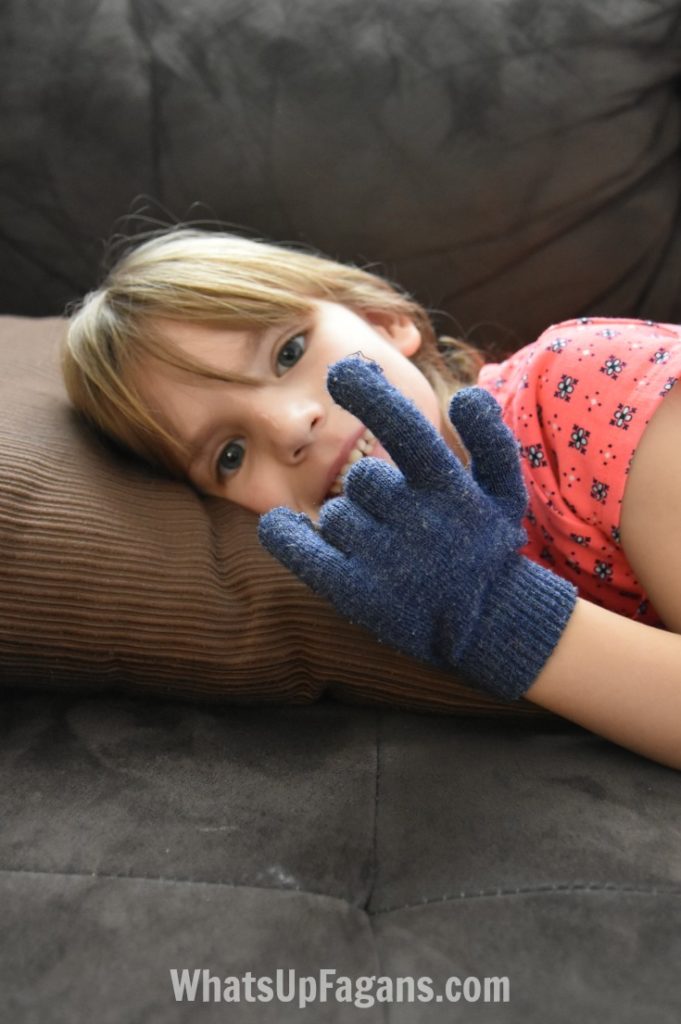 Some of her strong-willed determination and resolve, a pair of $2 gloves, and the finger sucking habit is done!

She boasts that she has no desire to suck her fingers anymore, and she can’t even remember sometimes which hand it was that she used to suck on. The callouses on her hands are also going away, and her fingernails growing harder.

Even without the self-soothingness of finger sucking, she still falls asleep like a champ. And added bonus is that she even seems less attached to her favorite blanket.

My husband’s impulse to buy a simple pair of gloves was spot on for our daughter. I was a total skeptic, even pessimistic about it (why buy some dumb gloves?). But, he was right. Mostly because she was ready.

I don’t know that this trick will work for all kids, especially if they really aren’t ready.  For example, we have absolutely no inclination of trying this with our three year old son, who also sucks those same middle fingers on his left hand. He is nowhere ready to stop his finger sucking habit. He sucks them often throughout the day and when falling asleep.

*UPDATE: We totally did this same trick with our 3 year old son, and it worked amazing for him too!! He no longer sucks his fingers. We had him wear the glove both day and night, and within a couple weeks, he too, no longer sucked his fingers. I have caught him once or twice suck on his fingers over the last several months, but that’s it! I still can’t believe my husband’s impulse to buy some cheap gloves was all that needed to happen for this habit to stop!

Even in a few years, I don’t know for sure that this trick will work with him, nor do I know that it will work for your child.

What have you done to stop finger sucking in your child?