Thanks to Fruit Shoot and Linqia for sponsoring today’s discussion. All opinions are my own. 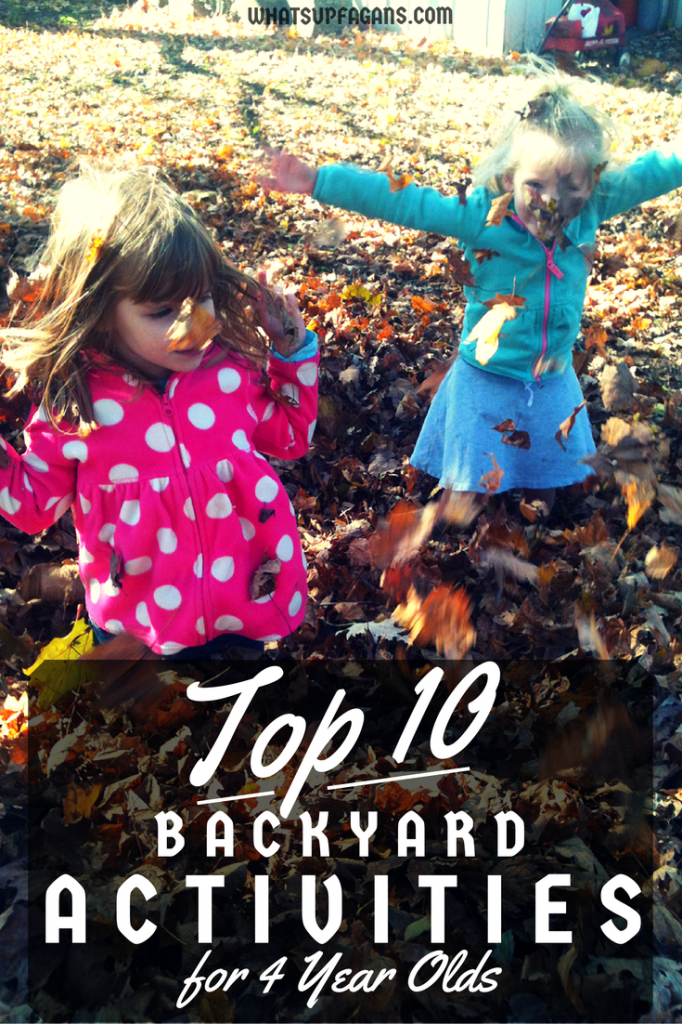 We moved relatively blind to our new home in Texas, as in, we never took a physical tour before applying, saw only a handful of pictures online, and ultimately left our home in Indianapolis to move into this one. But, we definitely lucked out as to what town-home we moved into! We are at the end of a row of townhomes and our backdoor literally opens up to a giant grassy field with a small playground at the far end. I love it and so do you my four year old twins! We have a giant backyard! I no longer have to worry so much about them going onto other people’s patios or peeking into other sliding patio doors  – we have solid doors in the back. And there isn’t another row of townhouses directly behind us like there was before. It greatly encourages backyard activities for our 4 year olds.

It seems as if four is the age my daughters have broken through a lot of physical inhibitions at the playground. They now slide down the fireman poles, hang upside down, walk along ledges, twist in their swings, and ask to always go higher and faster. They also want to use their bat and ball and play catch. They want to throw, run, shoot, toss, hop, skip, spin, tumble, and so much more. At the age of four, it seems that they are ready to try many more physical endeavors. And I love it! I love that they are getting better at coordination (slowly) and control of their bodies. It’s exciting to see them take risks and try new stunts. Make sure to read to the end where I talk about how Fruit Shoot can make your kids’ stunts like those of an action movie! 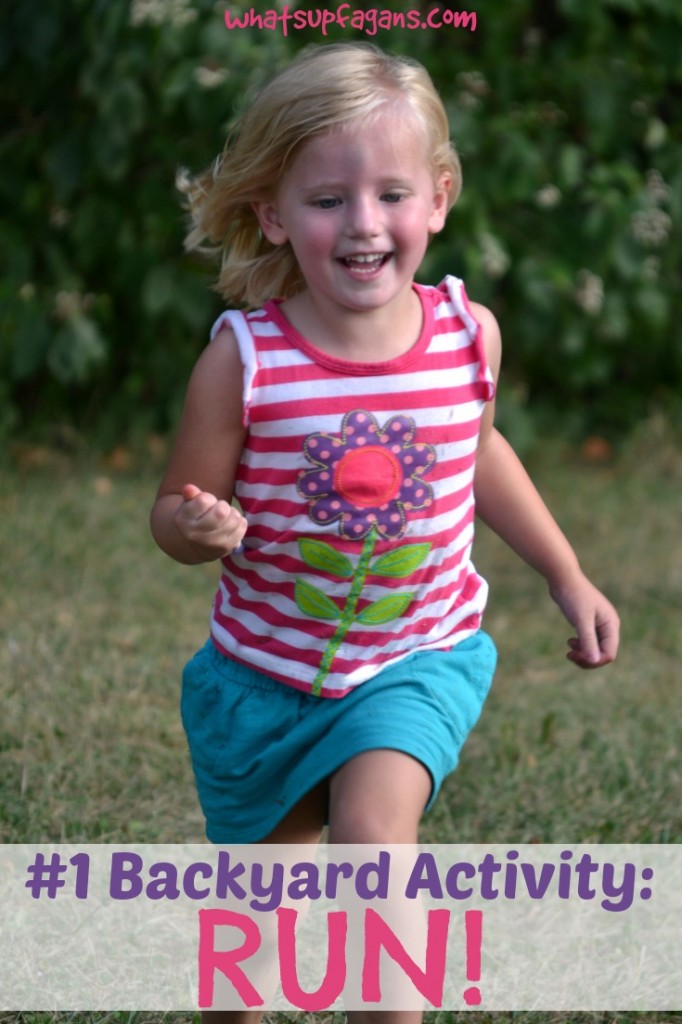 Simple and Perfect. Running is for sure the #1 backyard activity for kids. And usually mom or dad is requested to join in, because my kids absolutely love, LOVE, being chased. 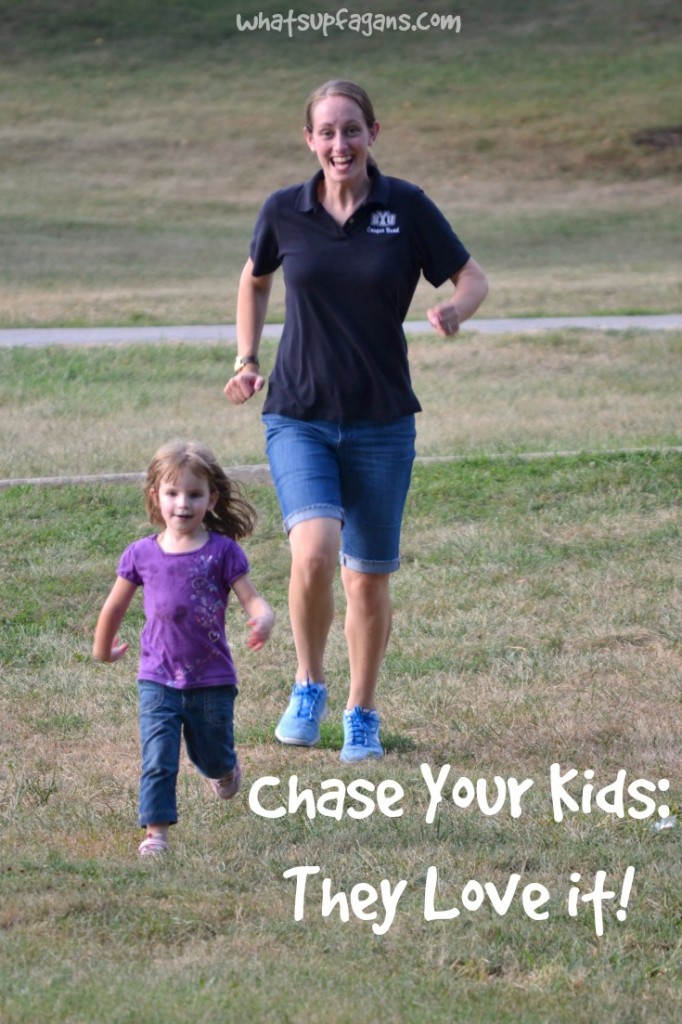 We’ve also held super mini races (where no one really wins because it’s not a competition, just a starting/stopping point) because my kids love the count-down to start and the competition. 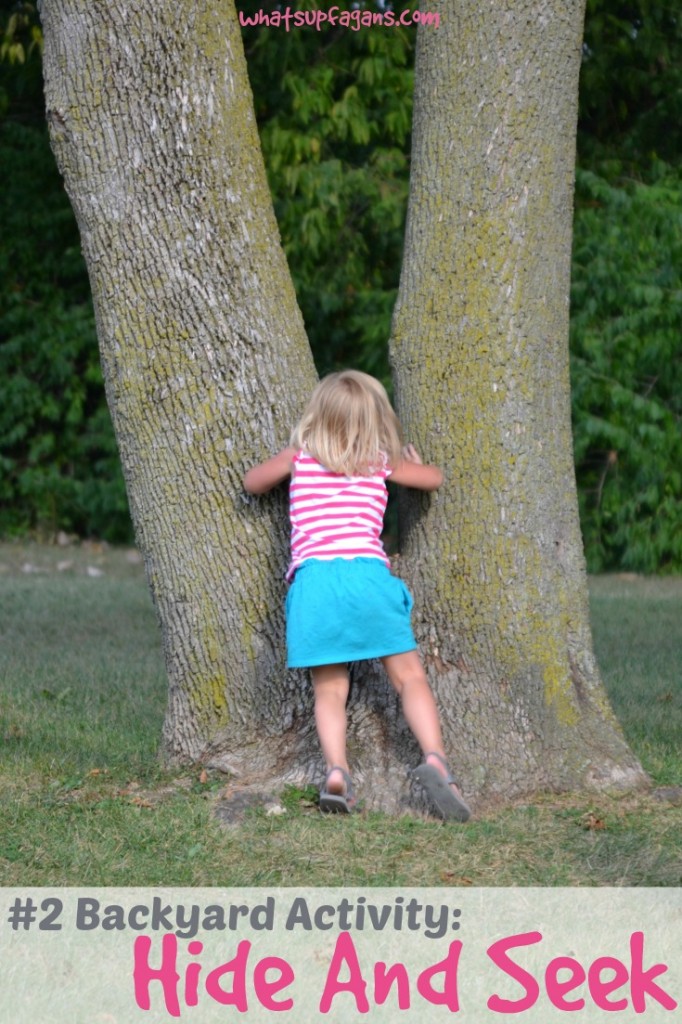 This one is a relatively new backyard activity, but my twins pretty much love playing hide n’ go seek outside, even though there is like nothing to hide behind. Usually they hide behind A/C units, under chairs, or behind parts of the building that jut out more. But, they still love it, from the counting, to the staying quiet (ha ha ha), to the finding each other. They also request for mom and dad to join in on this activity too. 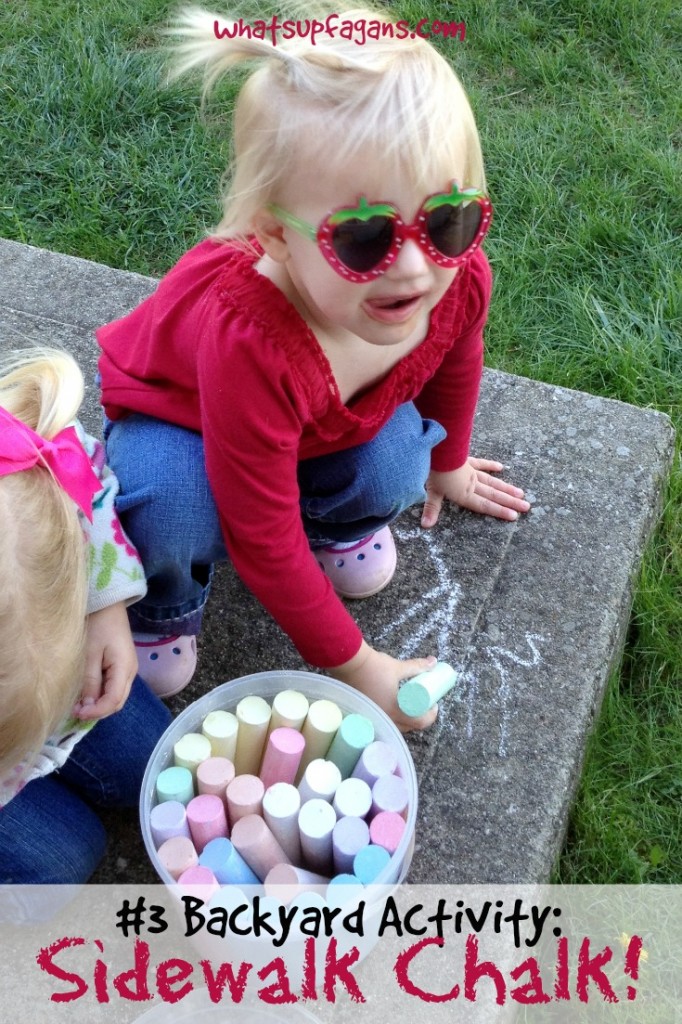 Even though we’ve only had tiny cement patios, my kids love going outside to draw on our patio with sidewalk chalk. Their artistic talent comes out, they practice writing words (mostly their names, Mom, Dad, and up), and making shapes and rainbows. They also love when their artsy mom draws something cool for them. 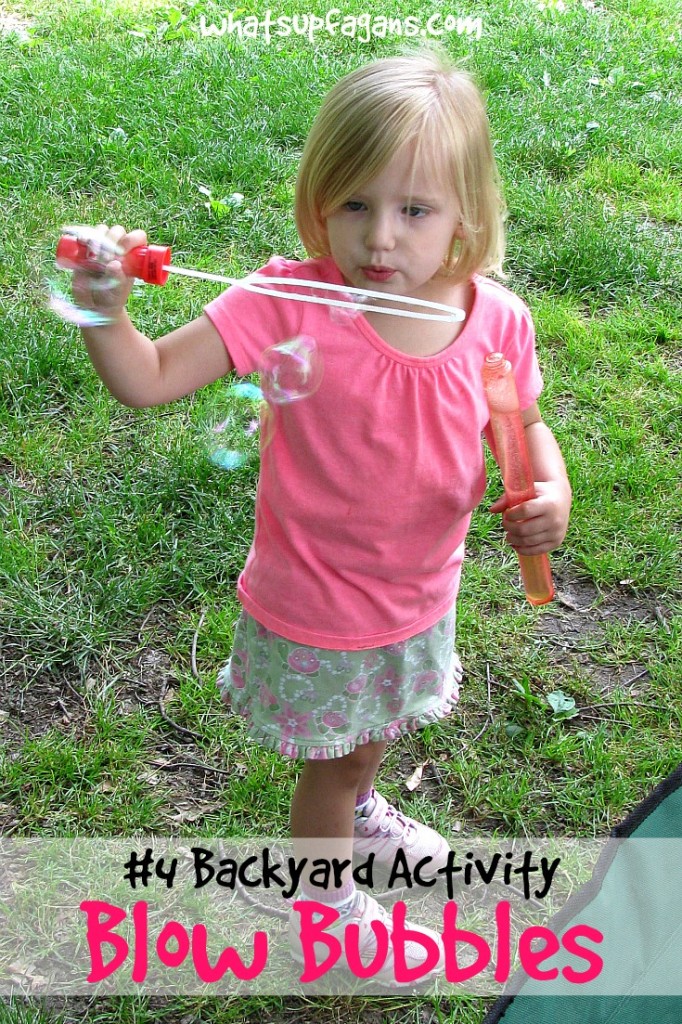 A simple bottle of bubble juice can make a child happy for a long time out in the backyard. Just make sure to get plenty of bottles (or make your own if that’s your thing) so they don’t have to fight and for when the bottle inevitably gets spilled all over the ground and your child. 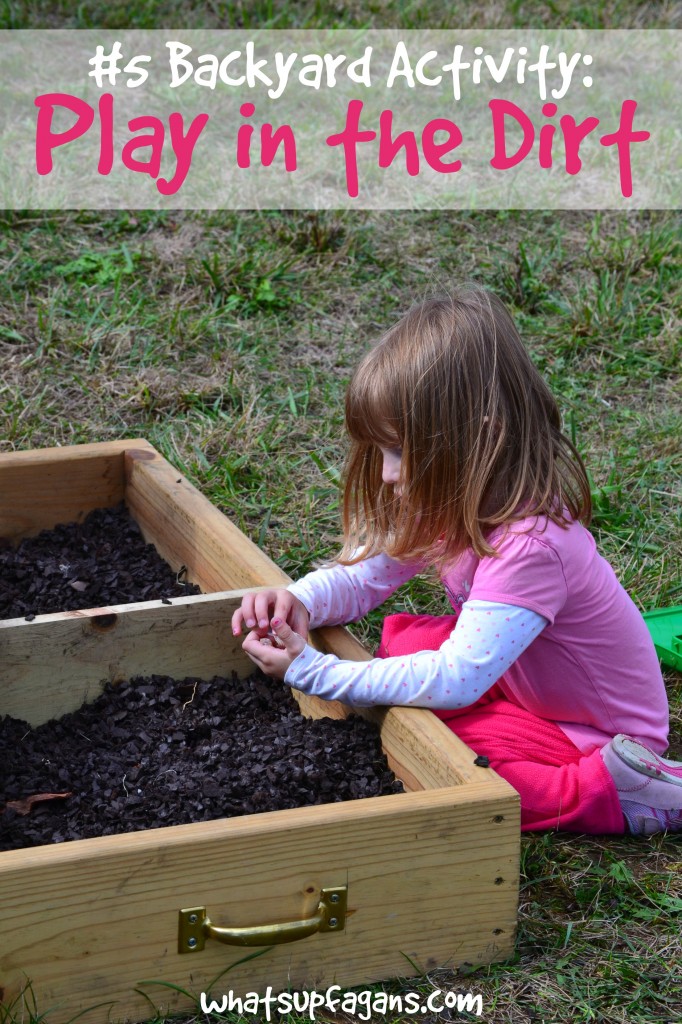 The dirt holds so many great things: worms, bugs, coins, bits of trash, rocks, sticks, and ant hills. My girls love digging in the dirt and checking things out. And they often just use their fingers, no shovels or sticks required. 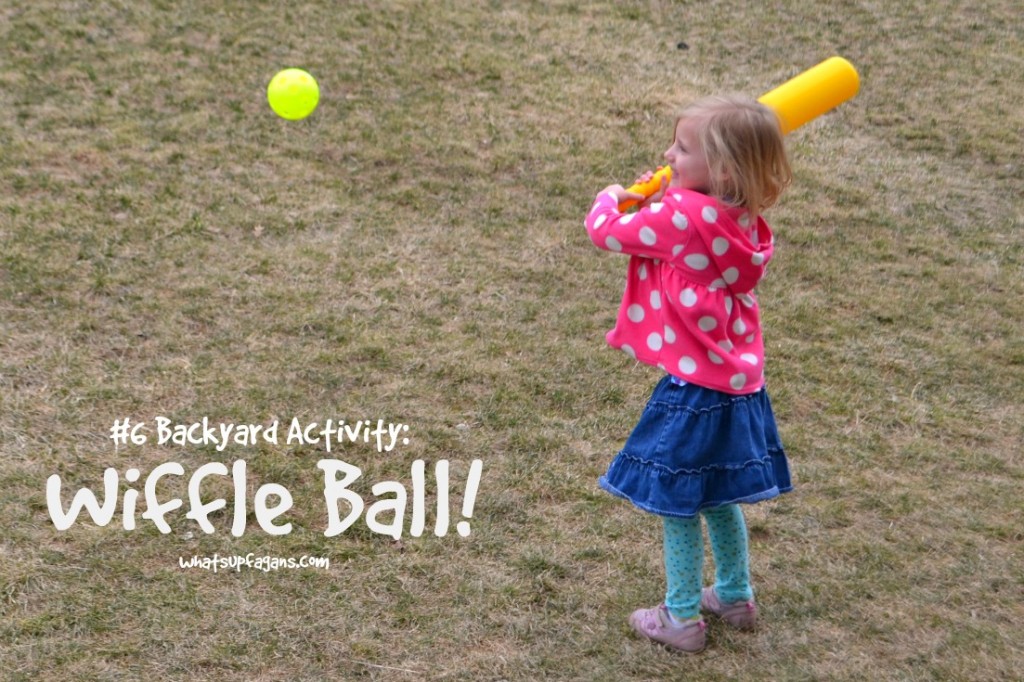 For their birthday this year they were given a big yellow bat and some neon green Wiffle balls and we have been playing softball (technically just Wiffle ball) out in the backyard ever since. Unfortunately, I’m a lousy throw most of the time. Lisa does a pretty great job of hitting balls anyway! And Alison likes helping retrieve the balls and giving them to me, as well as just playing catch with me. They know what stance to take and everything. 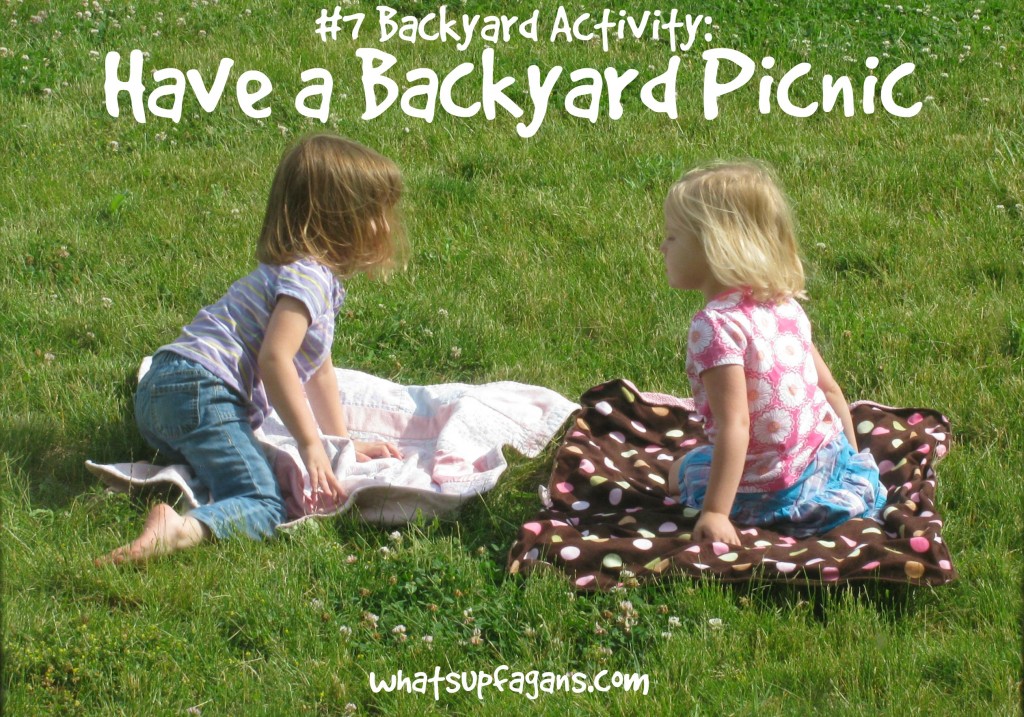 For whatever reason, my girls have loved taking their blankets, pillows, or swim towels outside to spread them out and lay down on them. They either pretend to have a picnic, usually accompanied with real food from our kitchen, or pretend it’s nap time and they need to put each other down for nap. Other times they just simply lay on the blankets/towels and look up at the sky. 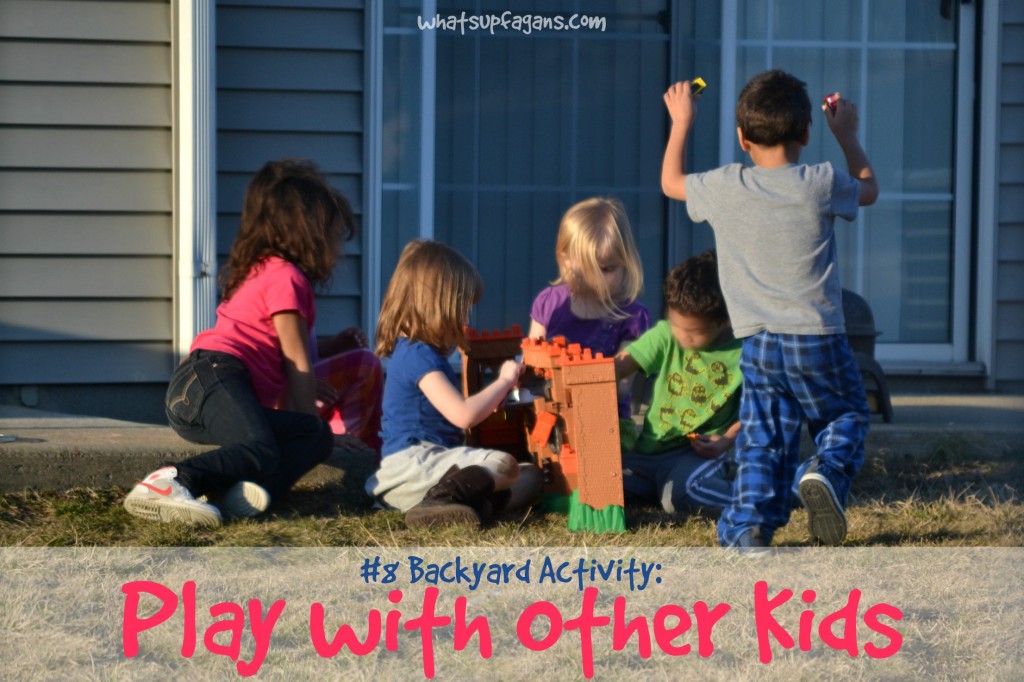 8. Play with Other Kids

We were so blessed that one of the neighbors that lived behind us had two boys that loved to play with our daughters in our “backyard” in our previous apartment complex. They played together all the time. Sometimes they would “get married” much to the boys chagrin. Sometimes they would bring out some of their toys, including a mini, single person, round trampoline, which my daughters loved. Other times they brought out race tracks and cars. Most of the time they simply did one of the previous backyard activities together. I really hope my kids can find some awesome neighbor friends in our new complex. 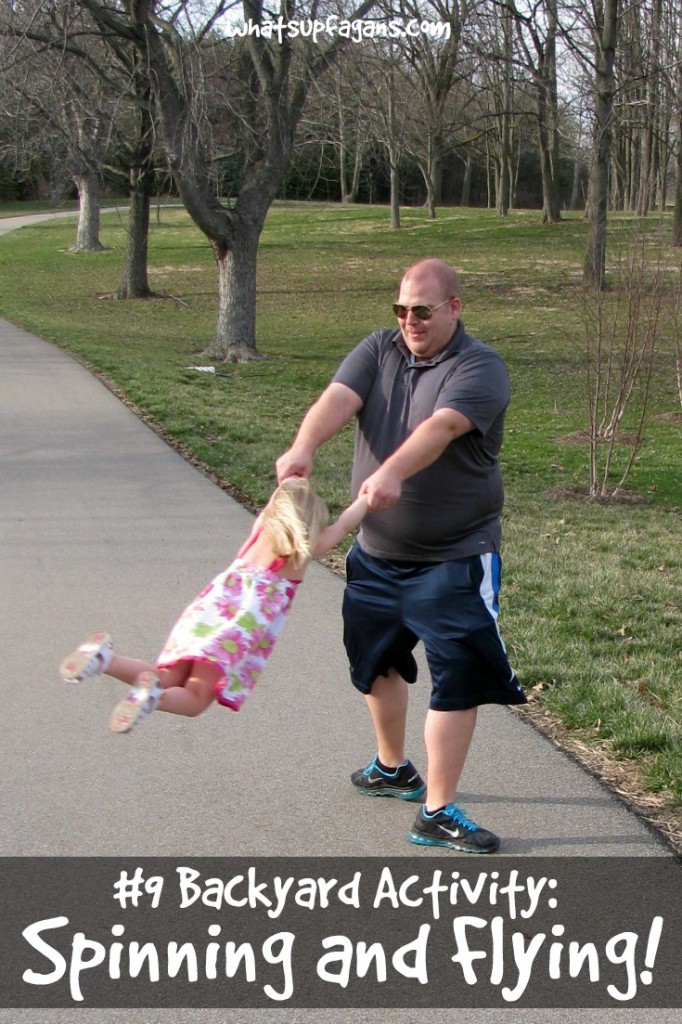 My daughters love to spin. Love it. And their dad also loves spinning them. When we play outside my four year olds often request that we play “Ring Around the Rosie.” We play this simply so that we can go “real fast” and their feet will raise up off the ground. They want to fly. They want to spin! We’ve spun them from behind their knees, from under their armpits, from their hands, from their ankles, and from their waists. My husband even recently started spinning them holding only one hand and one foot, which either terrifies them or elates them. Since there is more room in the backyard, this is definitely one of the favorite places to soar! 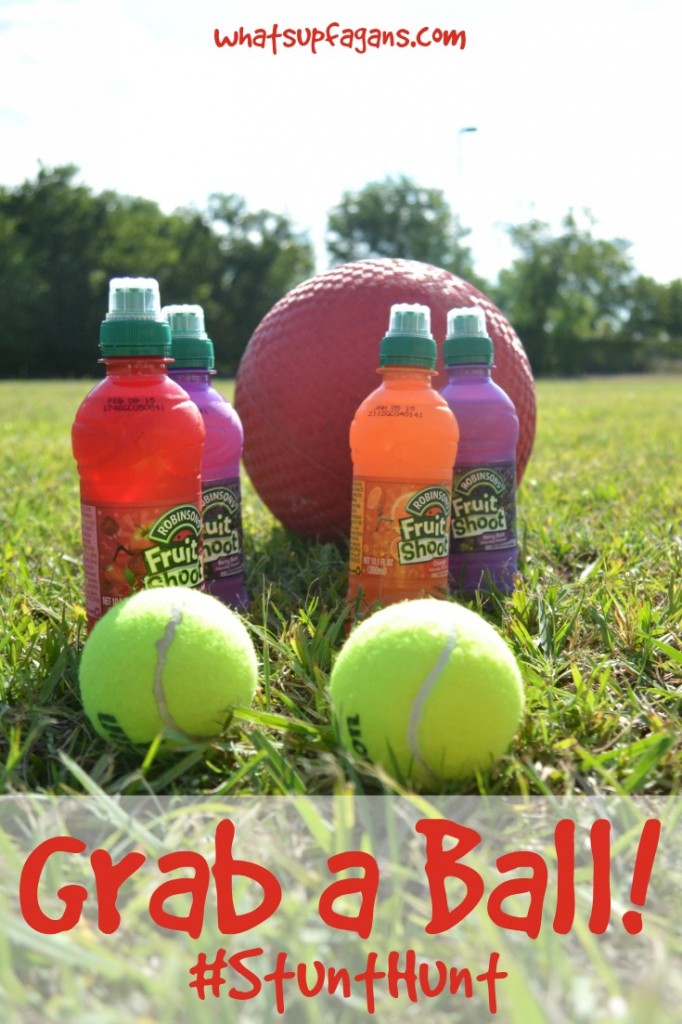 Tennis balls. Baseballs. Dodge balls. Wiffle Balls. Giant blue balls. Whatever! If it is round, it can likely become a great outdoor toy. My kids enjoy kicking and rolling around on balls outside, as well as sitting on them, putting them under their shirts, and much more.

Right now you can grab any ball, and a Fruit Shoot bottle, and record your child’s best creative backyard activity and submit it to the Fruit Shoot Have a Ball Stunt Hunt. Each week a winning video will get a Hollywood special effects treatment staring your child and your short, 30-seconds or less, video.

I picked up some bottles of Fruit Shoot and had my daughter Lisa show off her awesome throwing abilities and then submitted it into the contest myself!

I think it would be awesome if it won, because she would love seeing her moves explode on the screen (I can just see that bottle burning in embers!), making her an action star, and would be something we could enjoy forever. Plus, I received a FREE bottle of Fruit Shoot when I entered the Stunt Hunt video contest.

So, pick up a bottle of Fruit Shoot – or six so you can get a FREE Waboba ball (the ball that bounces on water, $9.00 value) – and encourage some imaginative, stunt-filled action from your 3+ year old son or daughter and get it on film and enter it into the Fruit Shot Have a Ball Stunt Hunt. You can film and submit it all from your smartphone; it’s really that easy! Plus, the Fruit Shoot are a great way to refuel after your fun backyard activities (or wherever it is you film). Just be sure to enter by September 1, 2014! 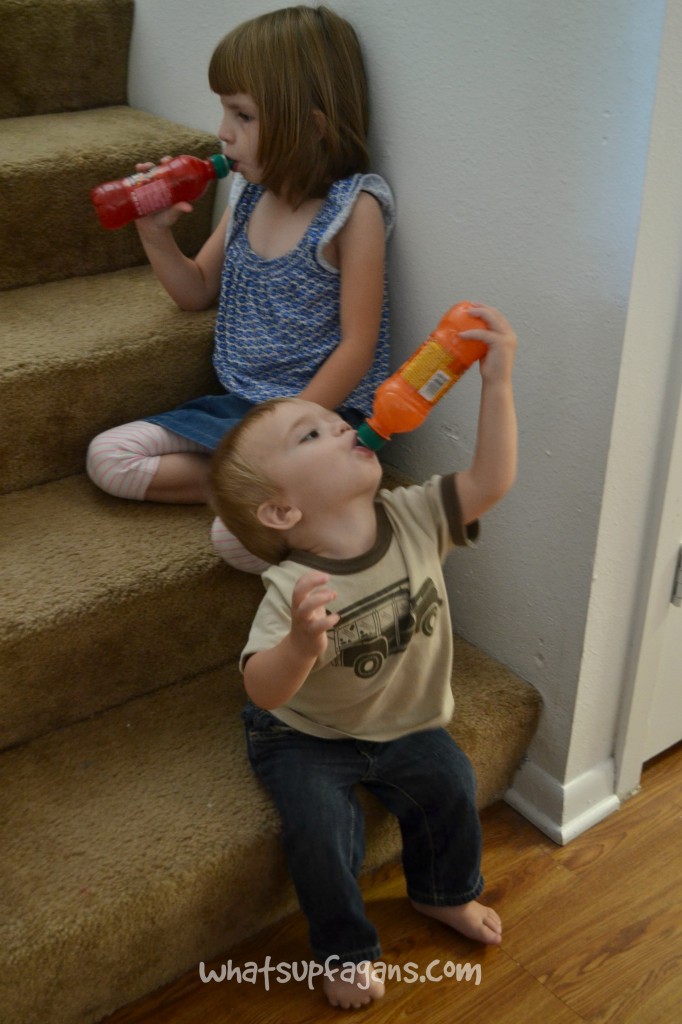 So what is your child’s favorite backyard activities?