It was again my turn to teach my daughters’ homeschool preschool group.  I was assigned the letter E and the number 5.  While E is for Elephant was an option, I thought an E if for Egg Preschool lesson would be way more fun and hands on! *Disclosure: My Affiliate Links are used below*

I was in charge of teaching the number 5.  With five digits on hands and toes, teaching this number wasn’t too complicated, and I had the added bonus of having five students.  But, before we began, I asked one of them to say a prayer.  And then we began! We counted how many students there were, counted fingers on each hand, and counted toes on each foot.  We then gave each other high fives!  I gave the students pencils and some paper and I helped them trace their hands and their feet!  We then later traced and drew a number 5 when we were working on the letter E.

E is for Egg – Preschool Lesson

The letter E, the fifth letter of the alphabet, doesn’t start many commonly used words (or at least it was hard to think of many), so I decided to do an E is for egg preschool lesson, because there is so much to talk about and do with eggs!

We began my lesson by first discussing the letter E, what the upper and lower case E look like, what sound(s) it makes, and some common words it begins (elephant, every, each, ear, envelope).  I had prepared some little note cards ahead of time with an upper and lower case E marked on them in a big highlighter, along with a 5.  I gave the kids each a pencil, had them trace each one, and practice making their own.  I showed them on a dry erase board simple ways of drawing them.  A lower case e, is like a circle (one of the shapes/letters preschoolers seem to be the best at drawing), but connects in the center and is open on the side, like a c.  I told them the bottom part of a 5 was like a backwards c.  Some did better than others, most ended up scribbling after a short period, but, its the practice and instruction that matter.  They will get better at fine motor skills as they continue to get older. 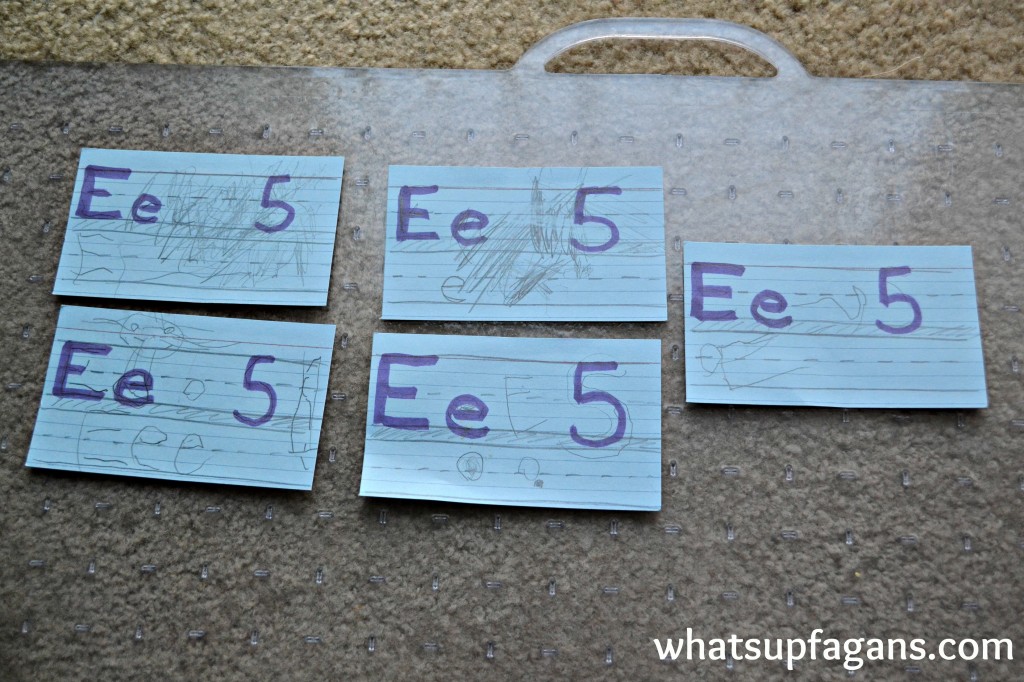 I then read a book I got from the library called What’s in that Egg? that talked about different animals that lay eggs, what the parts of an egg are (I learned the word albumen), and get to peek inside a few as they grow.

Before my teaching session began, I had boiled water on the store.  I let each preschooler look and touch an egg.  Feeling the hard shell.  I told them these eggs were chicken eggs, but that no chickens were growing inside them.  I then helped each child gently lower an egg into the pot of boiling water so we could make hard boiled eggs.

Next I demonstrated how to crack an egg!  I gently tapped it on the side of a bowl, and once it cracked, opened it with both thumbs.  I then had the preschoolers look at the inside of the egg (telling them not to put stuff in their mouths because it could make them sick).  I pointed out the yolk, the albumen (or egg whites), and talked about how it was slimy.  Each child then took a turn cracking and opening an egg.  They did great!  They washed their hands immediately after their turns.

We then pulled up a stool to the preheated frying pan and dumped all the cracked eggs into the pan.  I let each child take a turn stirring them, asking them to look at how the eggs were changing from a slimy texture to a cooked texture.  We added some salt and pepper too. 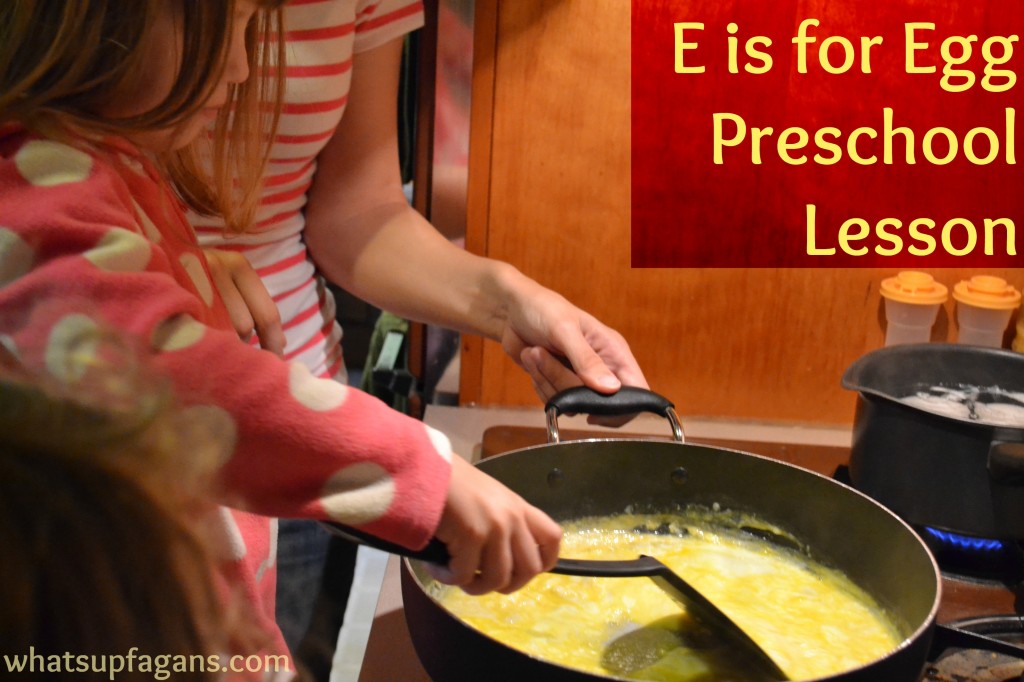 I finished up scrambling the eggs, and then got the students to sit down again (they would take little two to five minute play periods throughout different parts of the lesson as needed).  I pulled out a large sheet of construction paper that I had drawn large bubble lettered E’s (upper and lower case) on and a number 5.  I put the plate of scrambled eggs in the middle and had them use their fingers and put some of the eggs inside the letter and number shapes.  Only one completely filled in a letter before all the eggs were gone – they ate it!  Which, was the idea. 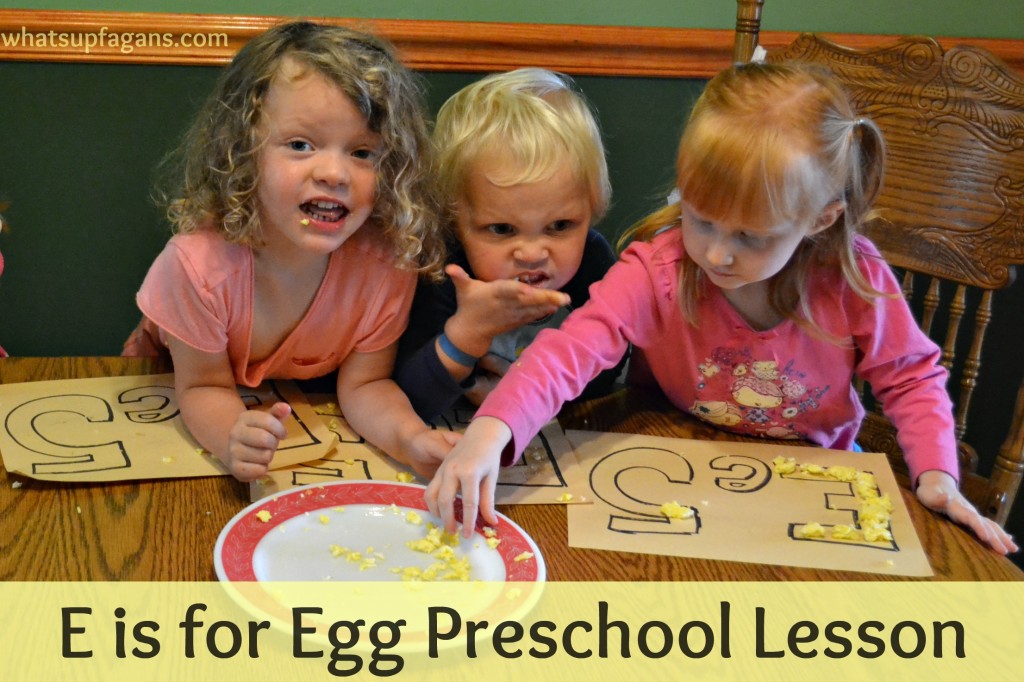 I let the kids play again, cleaned up the mess, and finished up the hard-boiled eggs.  I had them sit down again, and showed them the hard-boiled eggs.  I began to roll one on the table, gently cracking it.  I stopped and gasped and asked where the slimy insides where?  I began to peel off the shell and show them the now hard inside.  I let them feel the egg.  It was wet!

I gave each child an egg to crack and peel the shell off of, and they all did a very good job!  After they were rinsed off, we sliced them down the center, talking again about the yellow yolks inside. We dumped the yolks into a bowl, and then the preschoolers helped me add in the ingredients I needed to make deviled eggs!  (My recipe is from How to Cook Everything, I love the Cayenne pepper in there.)  We took turns stirring and then I finished if off while they played some more. 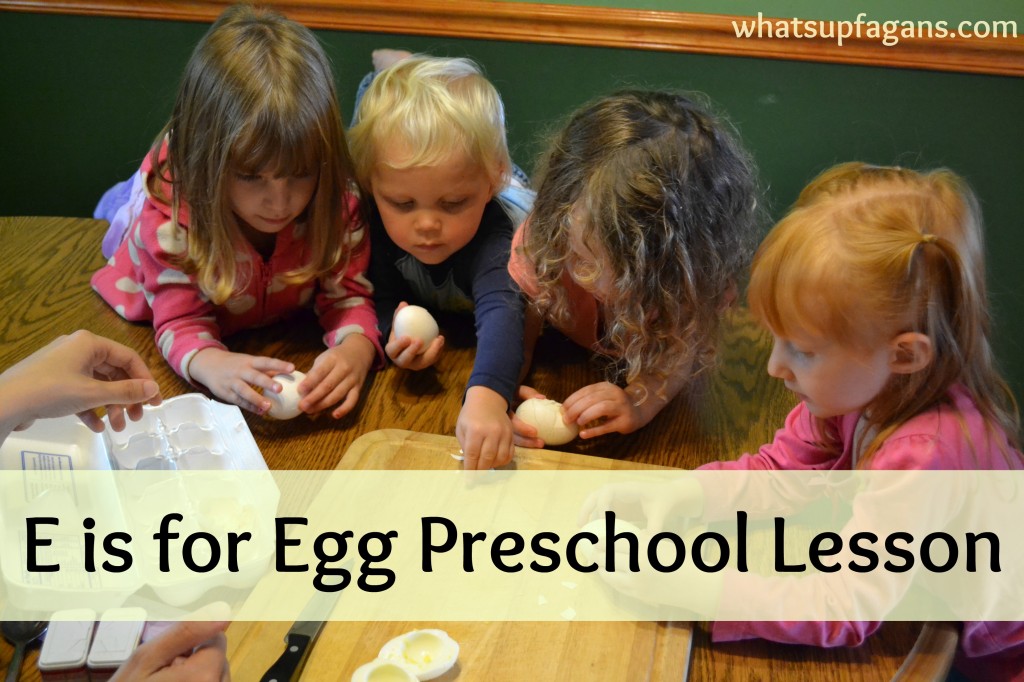 I filled up the deviled eggs, and called the students back.  They tried adding paprika themselves, but some had a bit of a problem with it, so I just added it myself.  So, the preschoolers helped my the E is for Egg preschool lesson snack that they all ate!  After all the snacking was done, the students all had a good half an hour to run around and play together.  That allowed me time to clean up and wash some dishes, since it was not at my house, and I wasn’t going to leave the mess for my pregnant friend to clean up.

I hope your E is for Egg Preschool lesson goes well and that I was able to help foster some ideas for you!

Other Resources and Ideas:

Check out the book The Egg by Shelley Gill
Sing the song, or read a book, about Humpty Dumpty. Dress up an egg, grab some horse figurines and act out the story!
Watch a video of an animal hatching out of an egg.
Dye/Color/Decorate Hard-Boiled Eggs (perfect if this is around Easter.  Could do E is for Easter).
Blow Eggs and then decorate them. (Idea Source)
Crush up egg shells and glue them to a letter bubble letter E and (optional) paint them. Idea Source
Make a nest with crafting supplies, yarn, fabric, feathers, etc. or with things found in nature.
Paint egg cartons, or do some other egg carton craft
Play a guessing game – Which egg goes with which animal?  Have large pictures of each.
Cook or have ready several different types of eggs – fried, scrambled, hard-boiled, sunny-side, omelet, etc.
Go to a chicken farm and collect eggs.
Go on an Egg Hunt
Serve Eggnog