It was my turn to teach our homeschool preschool group this week. We had two weeks off due to fall break, and started it back up Monday.  We did it at my house this week, and one of the kids wasn’t able to come due to sickness.  My preschool lesson was all about the letter I and the number 9. My lesson focused on teaching about how I is for Ice, Ice cream, Inch, and Igloo!

Since I is one of those letters that does not start a ton of common words, I decided to teach about temperature a bit, as two common I words are ice and igloo.

At the start of the lesson, we gathered around my table, had a child say a prayer, and then we drew upper and lower case I’s on construction paper with markers. We then drew 9’s. I then drew nine little circles in a square formation and had them count along with me.

I is for Inch: Learning to use a ruler

In order to learn about temperatures, I introduced the word Inch, writing “inch” on a piece of paper, and then explaining how inches are a form of measurement.  I showed them some rulers, showing them the numbers on them, and then I measured how tall they each were in inches, as they stood up tall against the wall.

I is for Ice: Learning about temperature

We then came back to the table, and I introduced ice, a thermometer, and temperature. I wrote the word “ice” on a piece of paper, saying “Ice starts with I” and telling them the sounds that I makes.  I poured a cup full of water and stuck in a meat thermometer. I showed them that it read 70 degrees. We then got our some ice, talking about how it’s cold, and starts to get slippery in our hands.  I asked them what ice is made out of, and they correctly told me water (they tasted it).  We then put the ice in the cup. We then watched as the temperature dropped down to 40 degrees!

Next, we poured our ice water into ice cube trays (which they all called an egg carton, ha). I made sure to emphasize that water in the trays was moveable, or liquid now. I stuck them in the freezer until the end of the lesson, by which time they were frozen! They were amazed!

When we were in the kitchen I talked briefly about items that were hot and cold. I asked them to tell me the words for freezer, refrigerator, stove, and oven.

I is for Igloo: Sugar Cube Igloos Craft 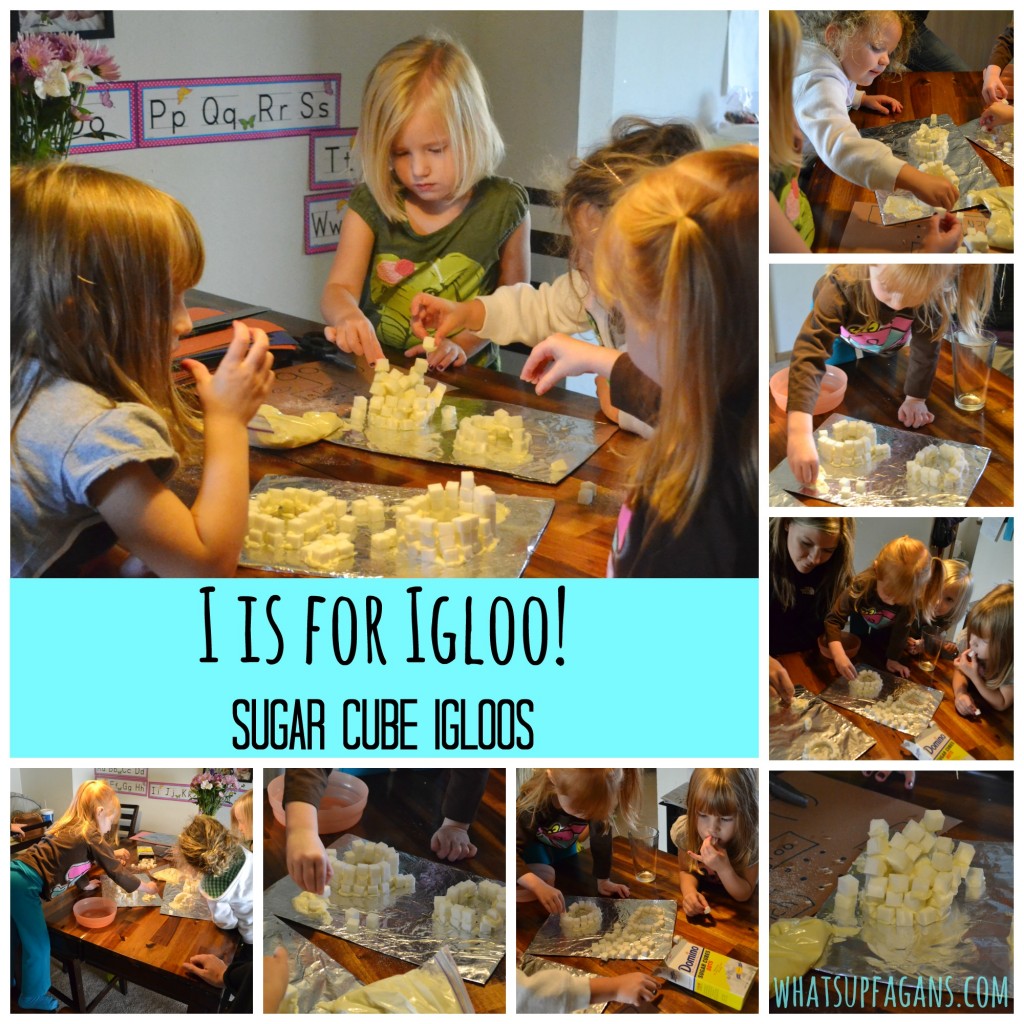 I pulled up some images of igloos on the computer, and we talked about how igloos are made out of ice cubes and that we were going to make our own igloos.  I had prepared some frosting and tin-foil wrapped cardboard, and put frosting in a circle on the boards for them to put sugar cubes in.  One of my daughters spent most of the time eating sugar cubes and frosting.  I eventually just made a pile of frosting on the boards to dip the sugar cubes in, in order to build up the next layers. All the girls worked together and had a great time building their own little igloos, working on those fine motor skills.

After this I let the girls play for a while.  If I had planned a little more in advance, I would have picked up some books from the library (they were waiting for me to pick up this morning, but at the same time that preschool begins) about ice, the nine lives of cats, igloos, or temperature.  Instead, I had a shorter lesson than I like.

I is for Ice Cream: Ice Cream in a Bag! 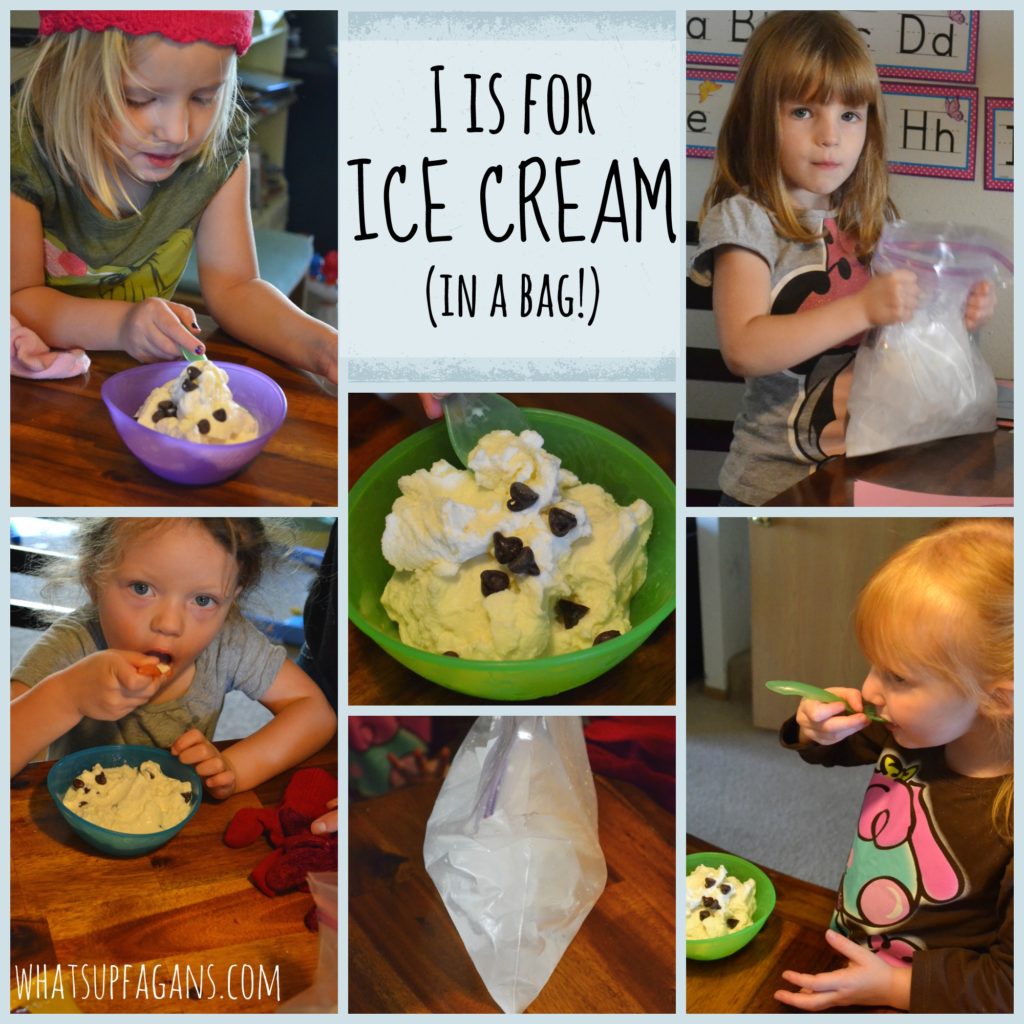 After they played for about 40 minutes, eating a snack of some cheese and juice in the middle, we called them back into the kitchen and made homemade ice cream in a bag! Each girl had their own bag to make ice cream in. The moms ended up doing most of the shaking, but we got out some gloves and had a good arm workout! One of the moms had never made ice cream in a bag before! She was a little skeptical it would work I think, but work it did!

1 Cup Half and Half

Mix above ingredients in a sandwich Ziploc bag. Seal. (Double bagging is optional.) Then put that bag in a gallon Ziploc bag that is filled half-way with ice and 1/2 cup Kosher Salt. Seal it up, and then shake the bag (double bag if necessary). The longer you shake it, the better consistency your ice cream will be. It will take at least 10-15 minutes.

After 10-15 minutes, we poured the inner contents, our homemade ice cream in a bag, into a bowl, added some chocolate chips, and enjoyed some yummy ice cream!  It was the perfect way to end our preschool lesson that day, solidifying that I is for ice!

Have you ever made ice cream in a bag? And how have you tried to teach about temperature and the letter I to your preschoolers?

*I am linking up at Less Laundry, More Linking!