I love Thanksgiving. It is my favorite holiday. It is ideally the one holiday a year that my very large family tries to get together. All of us can never make it, but we like to get as many as we can together for Thanksgiving. There’s no pressure of presents.  The only thing we need is family and some good food, food which I pretty much only eat once a year.  I crave those mashed potatoes and turkey doused in yummy homemade gravy.

So, because of my love of this awesome holiday I decided I wanted to host a special Thanksgiving play group party! A lot of normally planned events and activities were cancelled last week (Monday’s preschool lesson, Tuesday’s regular play group, and Wednesday’s library story time) and I was wanting something to fill our suddenly open week!  I live in a small apartment, so I invited only a few people and their kids over, asking them to bring something to share, and then planned some fun activities. 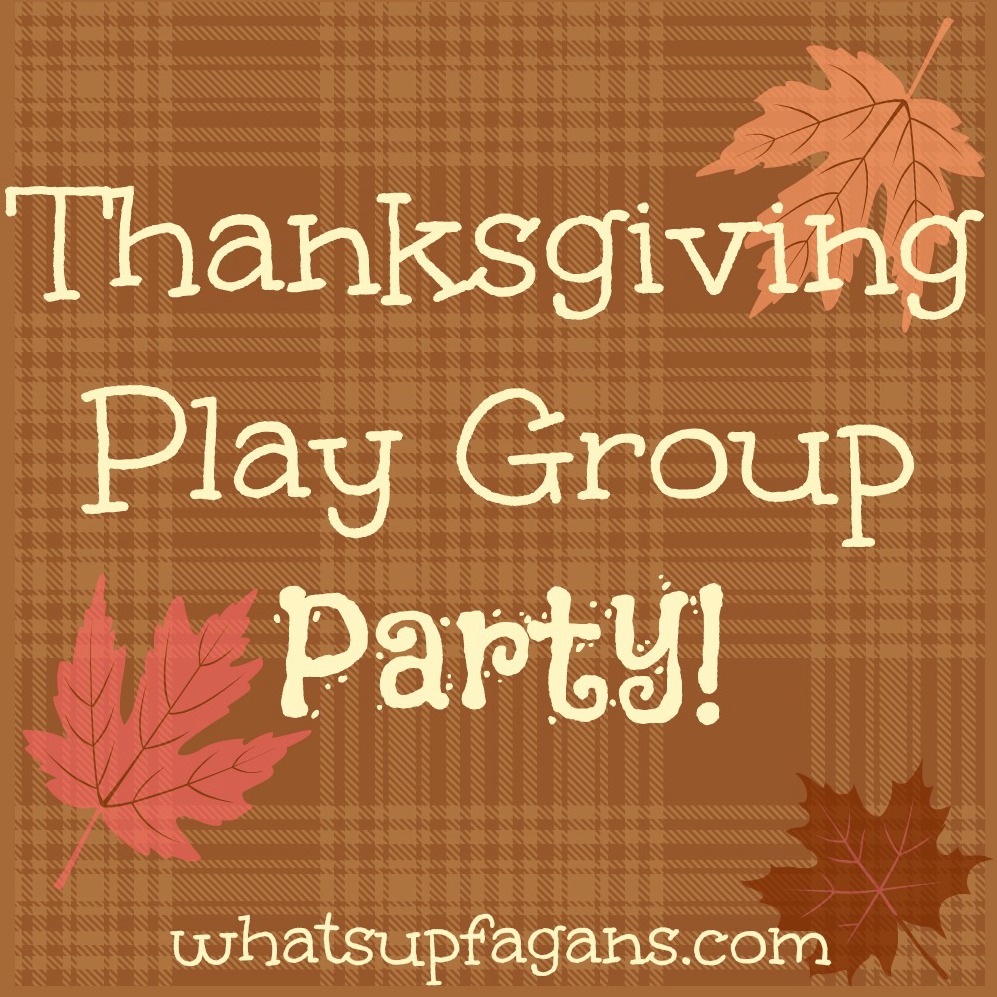 For our Thanksgiving play group party I printed off a bunch of free Thanksgiving printables (from Babble, Free Coloring Pages, and Parents.com) and supplied some crayons and markers for them to color them with.  I was pleasantly surprised that they colored for a good 20-30 minutes. This was helpful as I was still finishing up making my deviled eggs. (Oops!) 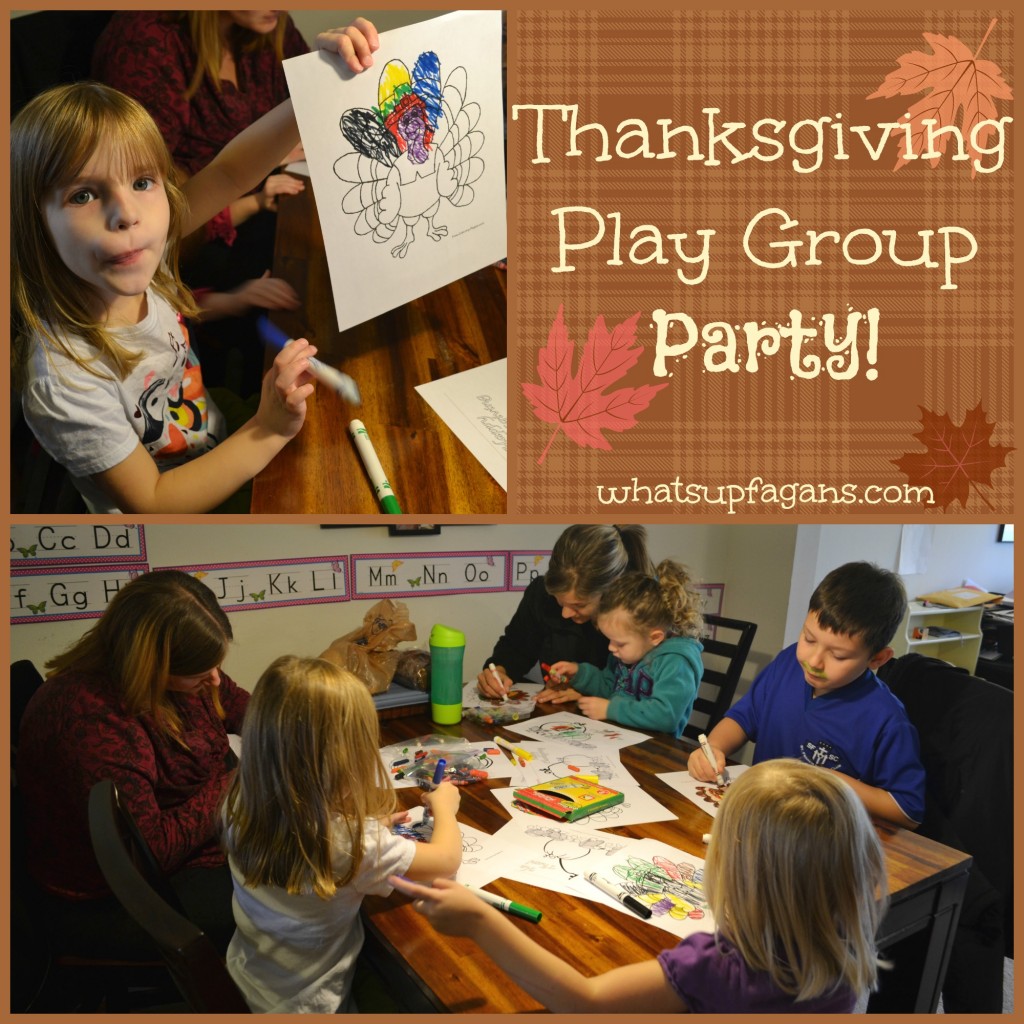 After that we ate! We snacked on deviled eggs (I had intended to make them look like turkeys, using almond slivers for the feathers on the back-end and a bacon bit for the waddle in the center, but was way behind, so it didn’t happen), popcorn, pumpkin bread with M&Ms in it, cookies, cheesecake, and pumpkin bars (recipe from Dinner is the Evening). It was the lunch of champions here!

Pin the Tail on the Turkey

After we all ate for a while we played ‘Pin the Tail on the Turkey.’  I found my tail-less turkey at Love to Know.

I made a bunch of tail feathers the night before with some construction paper. My daughters helped me trace the leaves and then I cut them out and made little lines on them.

The little kids were all a bit confused about why they couldn’t see to put the feather on the bird and kept trying to remove the scarf blindfold, or were trying to cheat by feeling around with their other hand. Some just wanted to spin around a bunch.

Either way, it was fun! 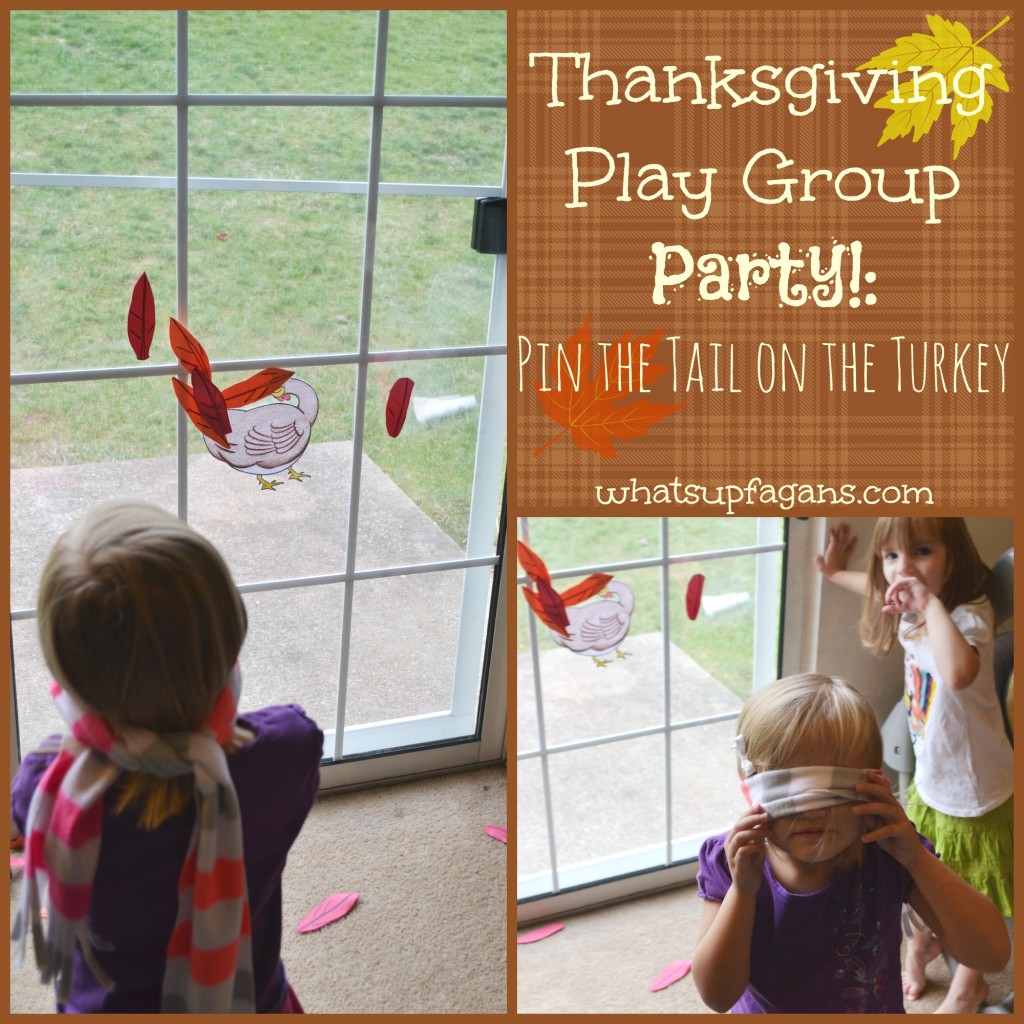 One of the things I believe is missing from Thanksgiving are some great songs!  So, I was very happy when I came across an old post from fun4kids!  A great post with tons of ideas for Thanksgiving play groups! So, I tried to sing a few of the songs. One of my friends laughed at my gobbling. She thought it was hilarious and that I should totally get it on film! Ha.  We only sang one or two, or tried to sing one or two. I guess I should’ve practiced them ahead of time. Here are the songs and rhymes:

I’m a little turkey; I like to play,
I’m very hungry; I eat all day.
When I see the hunter with his gun,
Then I know it’s time to run.

Turkey in the Barnyard

Turkey in the barnyard, what does he say?
Gobble, gobble, gobble all day.(flap your elbows like turkey wings)
Turkey on the table, what do you say?
Yummy, yummy, yummy all day.(rub your tummy in a circle)
Turkey in my tummy, what do I say?
I ate too much turkey on Thanksgiving Day!(hold your hand on your belly and make a pained face)

The brave little Pilgrim
Went out in the wood
Looking for a meal
That would taste really good.
First she/he picked cranberries
Out in the bog.
Then she saw a turkey
Hiding in a log.
Run fast little turkey.
Run fast as you may.
Or you will come to dinner
On Thanksgiving Day!

Have you ever seen a turkey? (tune of The more we get together)

Fat Turkey’s Song (tune of The more we get together)

Another game we played, which idea was sparked by fun4kids’ “Where is Mr. Turkey” game, was a lot of fun. We had all the kids close their eyes and go up on the stairs/landing in our apartment and then I hid a turkey printout around the downstairs. It was a little tricky as some of the kids peaked and instantly knew where it was. To make the game fun, we would gobble faster/louder when the person/people looking for the turkey printout got closer (warmer) to it, and slower, softer when they were farther away from the turkey. It a little weird to gobble instead of say warmer or colder. I wish there was a better word/sound we could’ve used for the “colder” as it was a tad confusing to only gobble.

I don’t know a bunch of young kids that don’t love playing Duck, Duck, Goose, so we made it Thanksgiving-esque by calling it Duck, Duck, Turkey. It was fun for the kids and they had no problem switching goose with turkey. We played several rounds, some of the adults getting in on the action too.

And of course we had to have a simple Thanksgiving craft for our Thanksgiving play group party! I’m not one for elaborate crafts (I’m artistic, not crafty!) so I decided we would do a classic thankful hand turkey.

Each child traced their hand or had someone trace it for them, and then they colored the fingers and had their parent help them write the things they were grateful for in the fingers/next to them.

We didn’t end up having much time to cut them out or do anything extra with them. Also, it’s a little hard to explain the concept of gratitude and thankfulness to three year-old children.

If anyone knows a great way of doing this, I’d love to hear it! 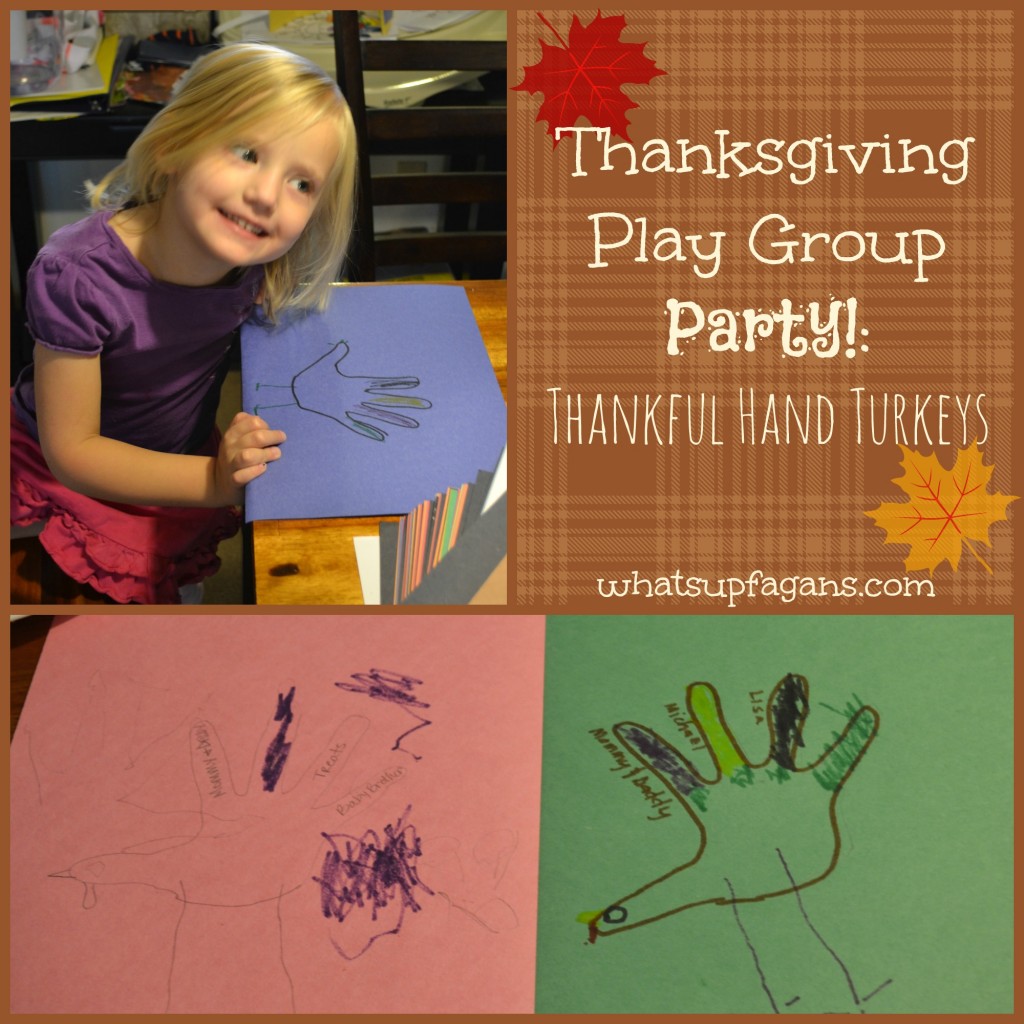 I didn’t do this for our Thanksgiving play group party, but there is this awesome Mr. and Mrs. Turkey Potato Head craft from Kiki and Company you could do with kids! It looks super awesome and the printables are completely free to download!

I hope you had a great Thanksgiving with your friends and family.

Have you ever had a Thanksgiving themed play group party? How did it go? What did you do?