This is a sponsored post written by me on behalf of Genesis Bows for IZEA. All opinions are 100% mine.

From the very first moment that I shot an arrow from a bow, I thought it was pretty much the coolest thing ever.

It was at Girls Camp for church, and that year’s girls camp was the bomb in large part because I got to do archery for the first time.

My first arrow? Completely missed the target. But my second one? Bull’s eye! The rest of my arrows all at least hit the target. I felt like a million bucks! I’m pretty I bragged about that for a while (and I guess still kinda am 10 years later). 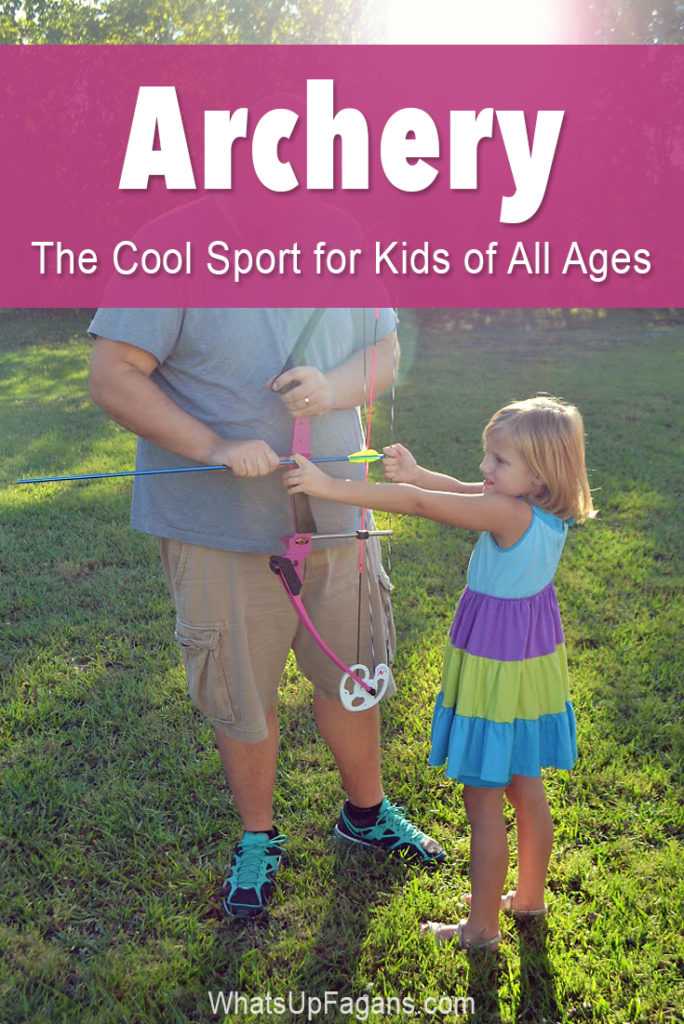 Unfortunately, we were only able to do one round of archery as we moved on to other awesome things like a rock climbing wall.

I didn’t know anyone who actually owned a bow and arrow themselves, well other than for hunting purposes, so I had to be satisfied with my one moment of glory, and move on.

However, a few years later, when my husband and I were moving from Utah to Indiana, we stopped at my brother’s house in Omaha. He let us stay in his oldest daughter’s room and I was really confused why she had a giant stack of empty cardboard boxes lined up against the wall. What was she into as a teenager?

Apparently, my niece was into archery and did archery at school and used the cardboard boxes for her target practice!  Do you know how much cooler and more interesting my niece became to me in that moment? She was already pretty amazing, but knowing she could shoot a bow and arrow, and did it often, made me yearn to shoot a bow and arrow again myself someday.

And that day finally came this last week after we gifted our five year old daughters their very own bow. 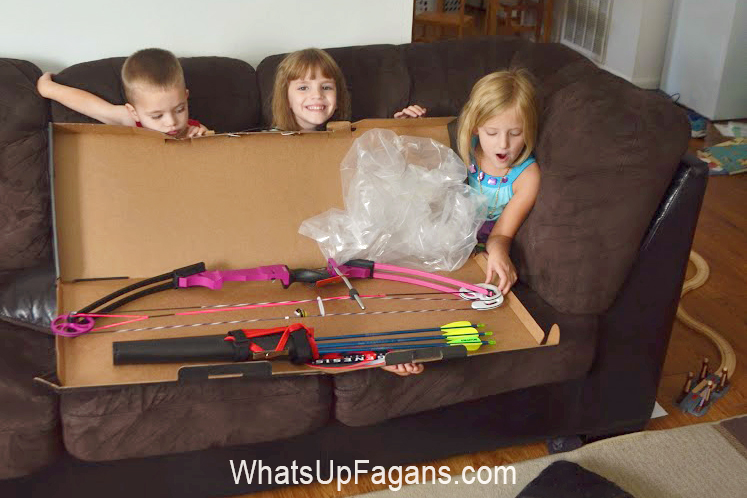 **If you are looking for kid-friendly stops along your route, be sure to download the GoWhee app the best app for traveling families.**

Why Archery is Awesome for Kids

I had never really considered archery  as something that I would get my kids into, honestly, but, the more I thought about it, the more I liked this idea. Here’s why:

Hand-eye coordination, balance, focus, discipline, and patience are common skills developed while learning the sport of archery. Shooting a real bow and a real arrow at a real target is thrilling, and very challenging. It takes a long time to do it well. It works on so many great skills, and we want our kids to have mad skills. 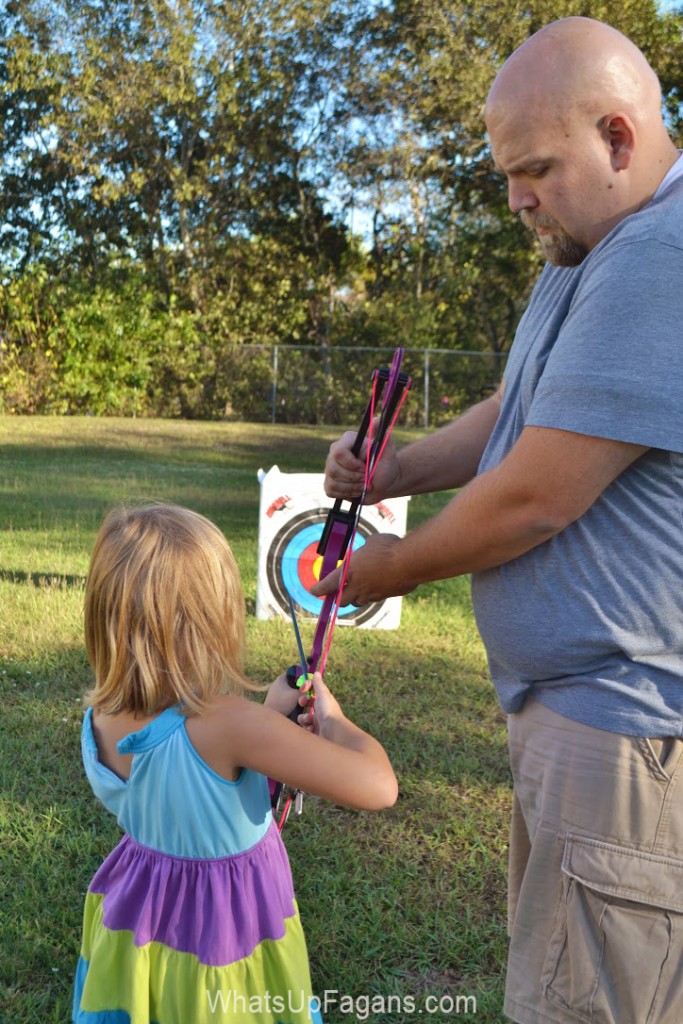 Holding a bow, placing an arrow, aiming, pulling back the string and then releasing it just so takes quite a bit coordination and effort, especially if you actually want to hit the target. But once you successfully hit that target you experience a huge feeling of satisfaction, because it was earned.

We often tell our children that they can do hard things, and when they do indeed accomplish those hard things, their confidence of their own abilities blossom.

Archery is a super fun social sport. Being able to enjoy using the bow at home or in your own backyard (city/county ordinance permitting) instead of visiting a range means that you can do it frequently, as long as you do it safely. I am all for spending time outdoors. 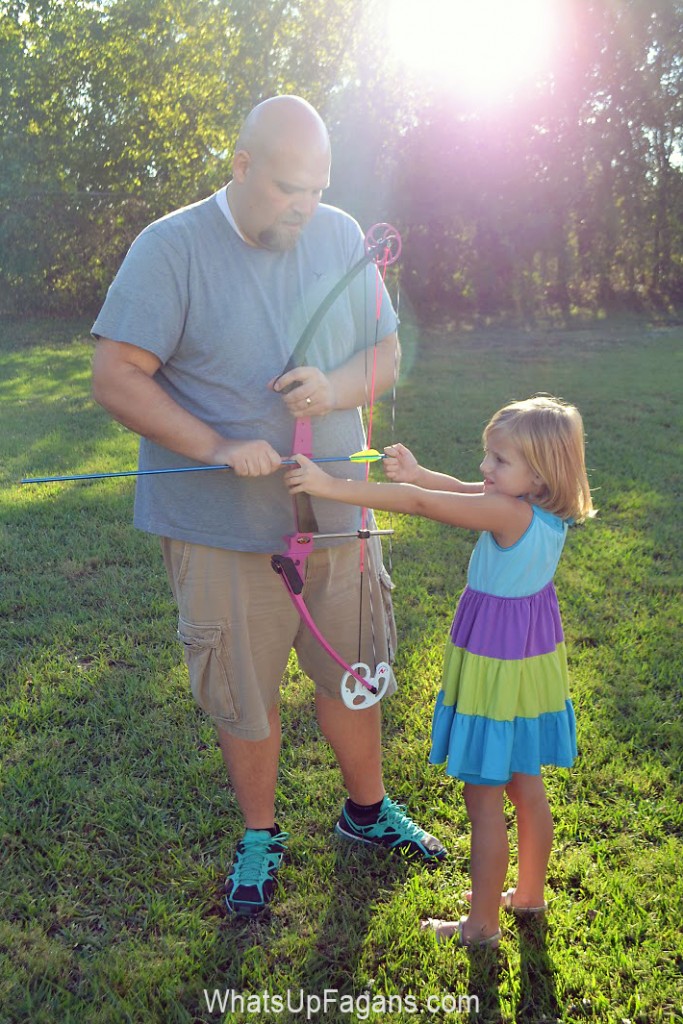 4) Perfect for Multiple Ages (starting from an early age!)

People of any age and ability can participate in the sport of archery, especially when they use Genesis Bows.

They’re perfect for introducing archery to young kids, starting at about the age of five, which my twin girls are. Genesis bows are the official bow of the National Archery in the Schools (NASP®), and are used in over 13,000 schools by over 2 million youth across the US annually. With a Genesis bow archers won’t develop bad habits caused by an ill-fitting bow because Genesis compound bows don’t have a specific draw length: children can’t outgrow them!

For tips on archery basics and how to take care of a bow check out Genesis Archery on YouTube.

I’m a painfully frugal person. Because of that (and other reasons) we haven’t really put our children into organized sports. The cost and time commitment involved really just seem too much at such a young age and for our family.

The great thing about buying a bow, kit, and target for our kids is that it is not just a gift for one person in our family: it’s a gift for all of us! 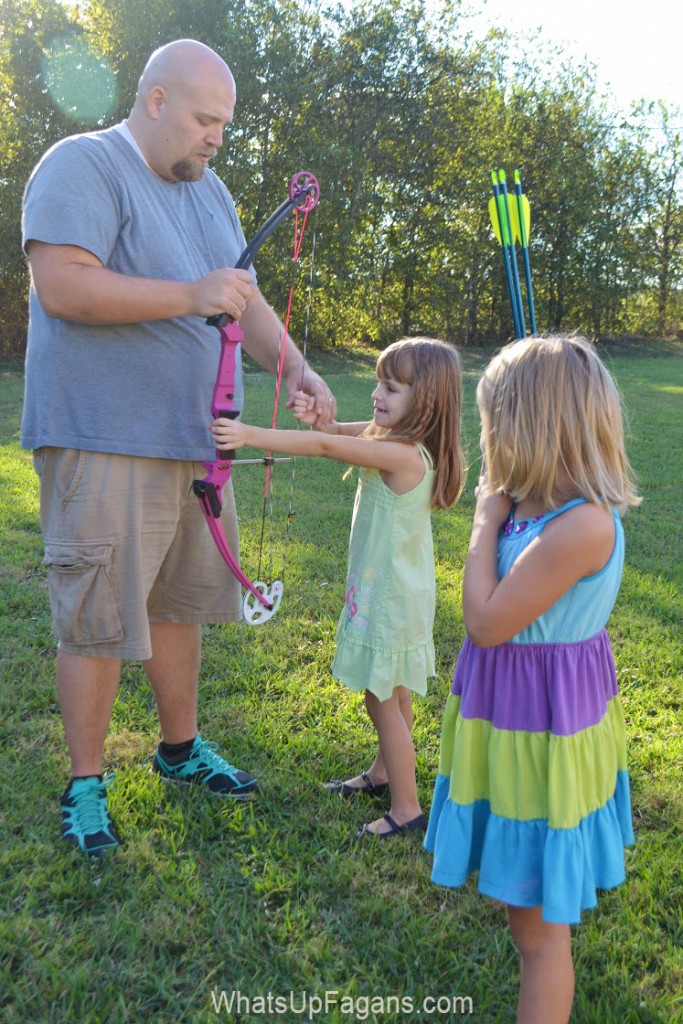 The Genesis bow fits my five year olds as well as my large husband. It’s a fun sport and outdoor activity that we can all enjoy together. The bow will last us years, assuming we take good care of it, and string and arrows don’t cost much to replace, either which we recently found out as well…

We gifted our girls a Genesis Build-a-Bow. I customized the colors of the various parts online, and then it was handcrafted in Sparta, Wisconsin (another reason to love my home state!) and arrived a few days later in the mail.

I hadn’t told my children it was coming, and they were very excited to open the box and see what was inside (they can’t read yet). They were stoked! I may have let them watch the movie Brave the week before to help hype them up.

However, my kids have been taking hangers from their closets and pulling the bottom of them back, and taking aim with the hook and pretending to shoot bows for months now. They were totally into archery before they even knew to ask for their own real ones.

Spending time with our girls using the new bow and arrows, along with letting some friends we had over use them, was so much fun. However, day one of using our new goodies, we lost two arrows. We searched and searched, but could not find the bright neon green tails anywhere! The ground was moist, and the grass was tall. We searched for about an hour to no avail. 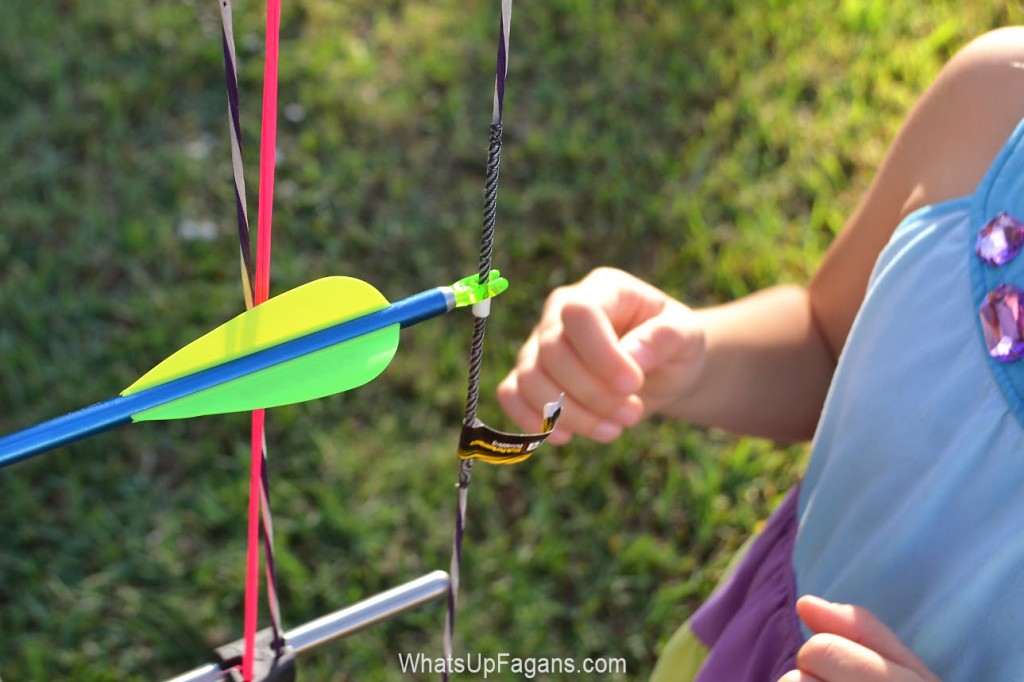 The next day we ran over to our local Academy Sports store and found that new arrows are only a few dollars each. We also saw several Genesis bows there as well.

Ultimately, the best part of gifting my kids a bow is that my teenage, camp-going self is finally able to relive the glory of shooting a bow and arrow! Except for the fact that I most definitely did not hit the bull’s eye with my second arrow, and most of my arrows missed the target completely. It was probably me that lost one or two of those arrows.

If you want to spend more time outdoors with your children, and get to play with their new gifts yourself, then you should really think about gifting a Genesis bow to your children for the holidays.

Let me make it easy for one of you to do just that with a giveaway!! One lucky reader will win a voucher to receive their very own Genesis Original Build-a-Bow! The giveaway will end Friday November 13, 2015 at midnight CST. Enter in the rafflecopter box below and good luck!
a Rafflecopter giveaway