When you are debating C-Section vs VBAC, chances are you want to know what to expect before, during, and after your VBAC delivery. You want to  know that other people had a successful VBAC without major scary complications. You want to hear positive VBAC success stories to boost your confidence going into your trial of labor after a Cesarean (TOLAC).

So, I am delivering these amazing delivery stories to you. And because many of us have various situations and desires for our VBAC delivery, I’ve included details and categories so that you can read these real success stories, from real women, from those you identify most with, and wish to achieve a similar result. 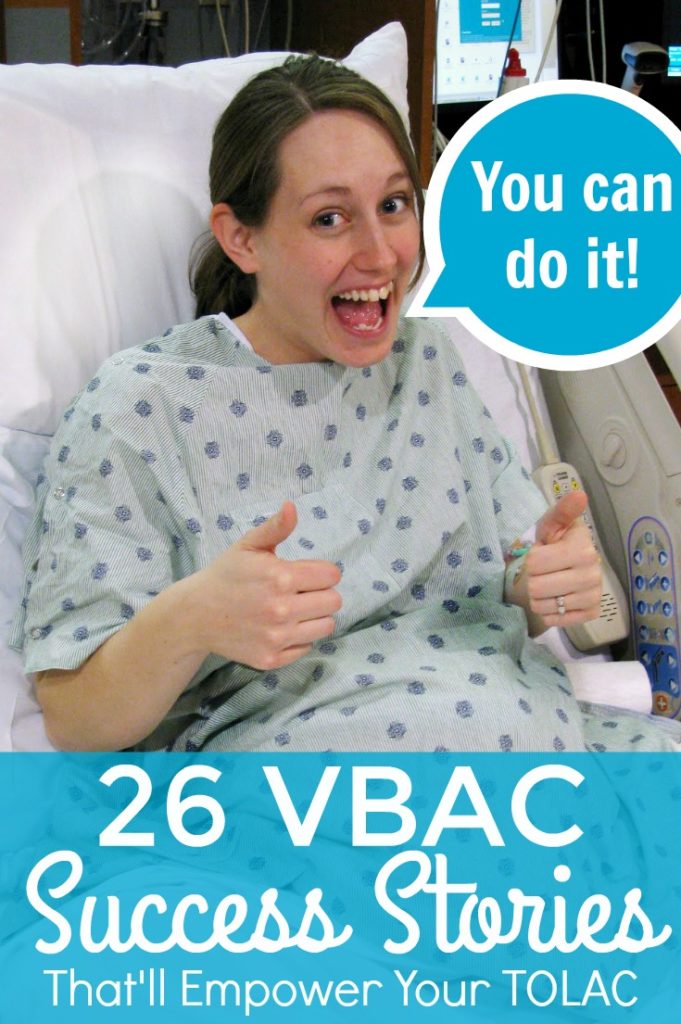 Both of Kara’s VBAC births  – her daughters June and Lola – were in the hospital with an epidural, and were large babies, both over 9lbs.

Both of my VBAC births – Michael and Emily – were in the hospital with epidurals as well and with babies over 9lbs too!

Despite wanting an unmedicated birth, Suzi ended up using Pitocoin and an epidural as she faced 38 hours of labor with her daughter. But, in the end she achieved her goal of a successful VBAC birth in a hospital with a doula and doctors at her side for her high risk pregnany.

This is a successful induction VBAC story, and of twins, but unfortunately, is also a sad story. The Halls had a C-section with their first child, and had a successful induced, with Pitocin, vaginal delivery of twin girls! Unfortunately, one of the girls had Trisomy 18 and was stillborn. Their birth story is broken into Part 1, Part 2, and Part 3.

Jana had a lot of trepidation and fear about her upcoming VBAC and decided to leave her obstetrician for a midwife who delivers at a hospital 10 weeks before her due date! Seven days after her due date she was induced with Pitocin and managed to VBAC without an epidural a 9lbs 1 oz baby girl.

Amy was 41 weeks when labor finally started on its own, but because fluids were low received Pitocin once in the hospital and it worked like a charm and soon she had her baby girl Tess in her arms.

Crissy had high blood pressure at 38 weeks and was induced with a slow drip of Pitocin as well as a Foley catheter. It got things moving and the pain a-blazing, so with an epidural and a little more time, her sweet baby proved to be another VBAC induction success story!

My daughter Emily was induced after we discovered she has low fluids. As I was past 40 weeks, the doctor sent me to the hospital where they broke my water, and several hours later also gave me a small amount of pitocin. It was a successful induced VBAC.

Sarah had already delivered a singleton baby vaginally before her C-section delivery of twins. When she was expecting her fourth baby three years after her C-section, she had a successful VBAC birth in a hospital with a midwife, unmedicated.

Adriel had a sacred beautiful experience with her successful unmedicated, all-natural hospital VBAC birth thanks to her supportive friends and midwife staff.

Little baby Lois was a VBAC success story that not only happened in the hospital without pain medication, but also a Hospital water birth!

Jana had a lot of trepidation and fear about her upcoming VBAC and decided to leave her obstetrician for a midwife who delivers at a hospital 10 weeks before her due date! Seven days after her due date she was induced with Pitocin and managed to VBAC without an epidural a 9lbs 1 oz baby girl.

Goldie had a ton of fear and trepidation with her approaching VBAC switching between wanting a home birth and a hospital birth, eventually deciding to labor at home with a midwife for as long as possible and then going to the hospital for the birth (which was only 10 minutes away) and she did just that and did a great job birthing a baby through her previously deemed small “cephalopelivc disproption” hips just fine.

After a vaginal delivery with an epidural for her first child, an emergency C-section with her second, Amanda shot for an unmedicated, natural VBAC, laboring with a labor coach until contractions got intense and then headed to the hospital where she delivered vaginally 30 minutes later.

Not only did Jaimie have a unmedicated VBAC birth in the hospital, but did so after 3 C-sections and no previous vaginal deliveries! 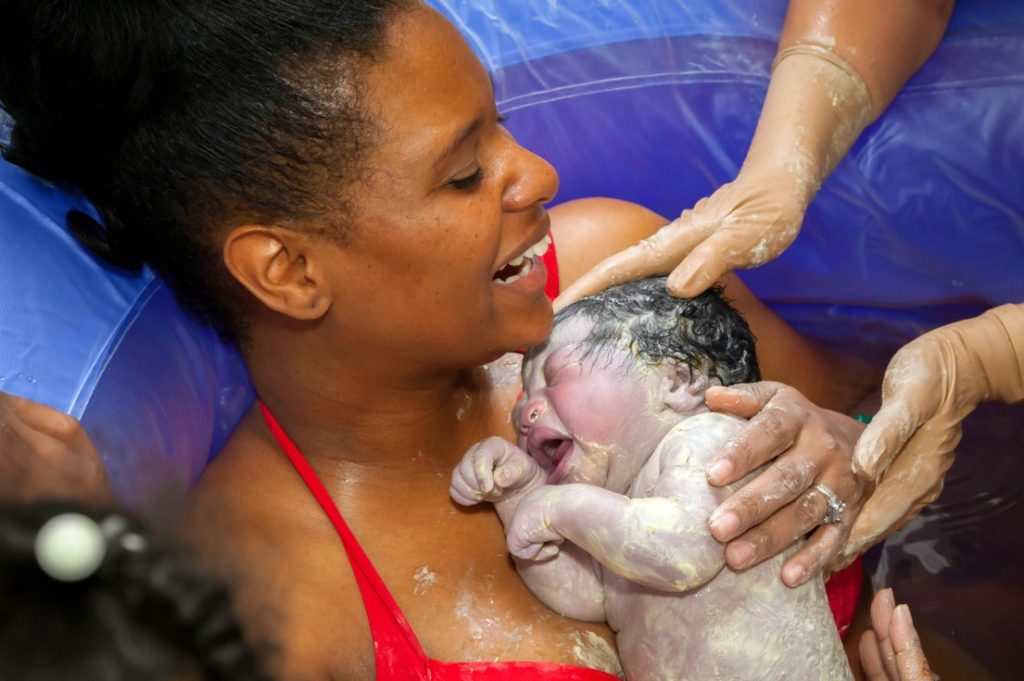 Kara’s VBAC of a healthy baby girl was in her home with the assistance of two midwives and her husband. The birth didn’t go quite as she planned, but it was still the most beautiful moment of her life. You can read more about why she chose a Midwife and home birth for her VBAC to help you decide if that might be the route for you.

After battling and winning against cancer, and being told she’d never have children, she went on to miraculous conceived twins!  They were born via C-section. 3.5 years later she conceived again, and found a midwife to do her first successful home birth! She again conceived shortly thereafter. Her VBAC with this baby was again at home, and this time so quick her husband caught the baby!

Melek of Black Women do VBAC shares her story of her home birth after two cesareans.

Kate’s home birth after two Cesareans (HBA2C) was a beautiful, sacred experience that was perfect (and includes a beautiful video).

After 3 prior C-Sections, Allison went on to successfully deliver vaginally at home!  She shares her emotional and wild journey for all four of her birth stories, and what it was really like to deliver vaginally, and at home, and to a large 9lbs 12 oz baby!

A hilarious, and thorough birth story from Charlotte’s accidental unassistated HBAC is a great read.

VBAC after 2 or More C-Sections

Jaimie had three 3 C-Sections. Her first baby was breech and the hospital she delivered at for her second and third child would not allow for VBACs, so she had two more scheduled C-sections. For her fourth child, God led her to a doctor that would support her having a Trial of Labor After Cesearean. She had an unmedicated successful VBAC after having 3 previous C-sections!

Caryn had a successful VBA3C as well! Her water broke and 24 hours later she had an unmedicated VBAC in the hospital (which was good as she was Strep B positive).

This mama thought once a C-Section, always a C-section, and had two. After educating herself and getting a great support team, she went on to have two successful VBA2C in hospitals.

Melek of Black Women do VBAC shares her story of her home birth after two cesareans.

This is a successful induction VBAC story, and of twins, but unfortunately, is also a sad story. The Halls had a C-section with their first child, and had a successful induced, with Pitocin, vaginal delivery of twin girls! Unfortunately, one of the girls had Trisomy 18 and was stillborn. Their birth story is broken into Part 1, Part 2, and Part 3.

Not only did Orlena successfully have a successful VBAC twin birth, but did so in a Spanish hospital, when her Spanish is passable, but not great. The twins came at 36 weeks after her water broke naturally. One had a breathing problem after birth, but both babies went home within a few days.

For even more VBAC birth stories, check out VBAC.com,

Do you have a VBAC success story to share? How did it effect your birthing experience?